The Morality of Watching for Free 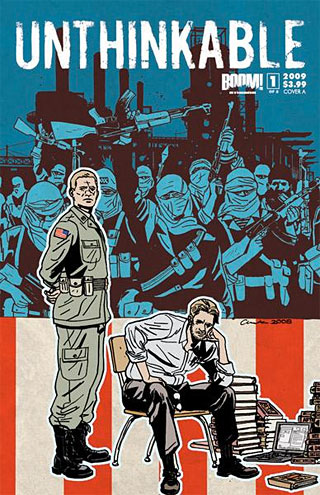 When “Unthinkable,” a new film by Gregor Jordan which stars Samuel L. Jackson and Carrie-Anne Moss, became available online — for free and in pristine quality — it wasn’t intentional. The film based on a comic by Mark Sable and Julian Totino Tedesco was bootlegged, only officially coming out Tuesday from Sony Home Video. The film’s producer, Cotty Chubb, spoke with Patrick Goldstein at the Los Angeles Times about the vibrant discussion and reviews on IMDb’s message boards of the film that’s not supposed to be out yet:

“It’s tremendous to go on IMDB and see that our user rating is 7.3, which is the highest rating of any movies in the current Top 10 there — you have to go down to ‘Iron Man 2’ to find a higher rating. But on the other hand, while everyone is debating all these important moral questions, I want to ask them another important question — hey, guys, what about the morality of watching this movie on the Internet for free?”

Meanwhile, Chubb has engaged the people who’ve been buzzing about the movie by steering the discussion to a vital economic issue, or at least a vital one for anyone who thinks there has to be a new economic model for film releases. Here’s a condensed version of what he wrote on the IMDB message board:

“I’ve heard a lot of reasons why streaming or downloading movies is a good idea, why everyone concerned should be happy with the attention (and in fact I am grateful for it), and how it’s the new real world, but I haven’t heard how the folks that paid for the picture are supposed to make their money back. So here’s one question, expressed a couple of different ways: Is there a fair price, fair in YOUR eyes, that you would pay for a download? ‘Hey, take a chance, it’s only a buck?’ ‘People tell me it’s great, I’ll drop two bucks?’ ‘Here’s three bucks, I can afford it and it’s only fair?’ What number seems right to you? ‘Or is it zero, screw it I don’t care?’ “

The responses have been fascinating, though I suspect they might also be profoundly disturbing to studio executives bent on protecting the windows model of releasing a film first in theaters and then on home video, all long before copies are available for downloading. Some viewers said they use downloading as a screening process to determine which movies they are willing to buy. Others suggested that studios embrace an iTunes model, with movies costing $2 or $3 to download. But everyone wanted the movies right away, not long after their theatrical release. And hardly anyone had any qualms about watching a pirated copy of the movie on the Web. It was certainly hard to find any enthusiastic supporters of the DVD model, since many consumers resent having to sit through the endless piracy warnings and trailer-ads that crowd the front of every new DVD.

While a similar situation happened with the Marvel Comics film “X-Men Origins: Wolverine,” which was leaked online prior to its May 2009 theatrical release, only independent films like “Children of Invention” have made strong headway by distributing concurrently with theater screenings.

One thing is certain: it’s great practice to build relationships with online audiences, like Chubb joining the message boards on IMDb, even if it’s not all sunshine and roses.