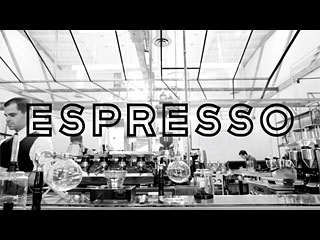 Intelligentsia Series is 'an ongoing series that documents our search for the ultimate tastemakers.'

After working at Imaginary Forces with Kurt Mattila on Spielberg’s “Minority Report,” Matt Checkowski started his own production/editorial/vfx firm, The Department of the 4th Dimension. Between pitching against other ad agencies for work — and his own feature film projects, no less — he’s trying out a series of short-form content that feels right at home online. Listening to people who are passionate about what they do is engaging in its own right. Filming it with creative prowess and distinct visual style, now that’s something you’ve got to see, even if you’re not a coffee aficionado.

You came out of the gates from design school. How did that established your approach to filmmaking? Do you feel there’s a different process — say, considering things as form vs. function? With your film/tv partners, is it delivering pre-vis animatics/drawing and, with your brand/campaign clients, is it delivering modular options? Also, does it not matter where you start, but how you make it?

Matt Checkowski First off, thanks for even thinking about me for this chat. We connected through the Espresso short film and it’s amazing to me how the smallest things can open up connections online. It’s exciting.

There are a few things that are always in the front of my mind regardless of whether the project is “design” or “cinema,” and I imagine what’s left over after those similarities is what pushes a particular project into one category or the other. 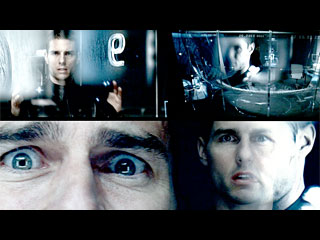 Screenshots from the work done on 'Minority Report'

The audience is up there on the list. Where are they sitting or standing? What will they be likely doing before and after they see what we’ve created? How are they going to engage with what we’ve done? In passing? Planted in a dark theater? Sitting at their computer? Why are they going to care? It’s really about contrast – in the service of grabbing attention and recalibrating our audiences point of view. This goes for the first 10 minutes of a film, television network branding, a website or an experience design project. I think a lot about the audience and how to reposition the context.

I read somewhere that someone said “Drama is more interesting than ideas,” and I like that. But I also like the ideas. They both serve different purposes at different moments. I’m stimulated by the concepts and the process and the possibility of ideas, but they’re meaningless to me if I can’t evolve them into something that inspires other people. I think the core motivation — be it an idea or a dramatic situation — is something that I sort out early on and needs to translate for the audience in order for the work to be successful.

I haven’t sorted out my final thesis on the overlap of design and cinema, but I know that my creative process is essentially the same for both. I will say that directing feature films has made me much more aware and appreciative of my audience and how they experience my work.

We pitch the hell out of projects and present as much as we can to sculpt this new world for our client and collaborators. Pre-viz, animatics, reference. Writing, concepts, stories. Each project is a multimedia extravaganza from the get-go. 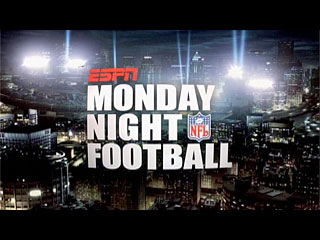 You were at Imaginary Forces, then co-directed â€œLies and Alibis,â€ and now do campaigns with ESPN Monday Night Football and Rock Band. How is your collaborative process on projects?

MC I collaborate like crazy. It seems that the key inspiration for each project tends to always come from an unexpected category. A branding project is built from a film excerpt. A virtual world starts with a photograph. That’s part of why I like working with really diverse teams at the beginning of projects. It opens the project up to new possibilities.

Sometimes the client doesn’t care about our crazy ideas, but that comes back to transforming those elements into something that is relevant for other people to spend some time with. More often than not, we’re sought out for this multidisciplinary process and thinking. It’s really how I think and thankfully it seems to be the way the world works now. 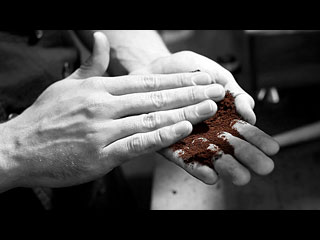 Where did the idea for the Intelligentsia Coffee short film series come from? Project on-the-side or clever commercial?

MC The short film series — the first three episodes of which are set at and about what they do at Intelligentsia — was just an original idea of mine whose time had come. Short, online episodes about beautifully designed objects or acts. I wanted to find people who were as obsessed about what they do as I am about what I do and hoped that passion would resonate with a broader audience. I’d been trying to get it off the ground for a while through a variety of different scenarios, brand or ad agency partnerships and nothing seemed to help it break through.

So we spoke with Kyle at Intelligentsia and just made it happen. It’s a crystal clear concept that just lets the star of the short do what they do best, without any logos or forced messaging getting between the story and you. We’ve got a ton of ideas for what to do next. I’m excited that people like it and hope that its early success will enable us to grow it wider and wider.

Two cameras, a Kino, color keying in After Effects and viola?

Yep. Super lightweight production process. Two Canon 5DMK2s. Tons of natural light and a small Kino. Then lots of love on the post side of things to really show-off the process and Kyle’s personality. The color treatment was tricky to execute but came from a simple spark: I loved the black and white footage but thought the coffee looked spectacular in color. It made so much sense with the story and I think that graphic treatment actually enhances the personality of our star. It’s the visual embodiment of his obsession. 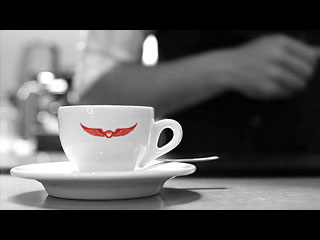 The series feels right at home online, with viewers discussing it on Vimeo, Twitter, and city blogs like LAist.com. What do you think is going to be the next big step forward in user-centric film?

MC I think so, too. It was a natural fit. I love this series in an online format. I’d love it even more if I could easily blast it onto other kinds of screens in a more effective way. XBox and Playstation downloads. iTunes channels. We’re working on some ideas now that will help us generate revenue to create more episodes in an effort to stay away from heavy-handed brand partnerships. I’m not opposed to branding and frankly think that the idea of “selling out” is long dead, but everyone in our industry knows it’s harder and harder to find people or clients who are willing to financially support content creation. That goes from commercials to shorts to feature films.

I think the biggest challenge is not only finding the great content online, but also developing ways to help the audience enable those content creators to make more great stuff. The success of this series has been super encouraging and I’m grateful to everyone who clicked the link and took the time to watch it. It’s really amazing for a truly viral project that doesn’t have a huge marketing budget secretly blasting links into the ether.

I’m not sure what’s next, but I’ve been thinking a lot about the money trail. Why does an audience have to go buy soap or a new car in order for their money to find its way through to the person who makes the motion picture content that they enjoy? That’s not a new question, but we’re working on some ways to explore our relationship with our audience in the online arena.

Thanks so much for the great questions. I enjoyed thinking and chatting about all this.

I caught the first episode on Vimeo last week and found it wildly engaging. So much so, that I felt a little ashamed that I've lived in Southern California my entire life, and still haven't made it to Intelligentsia. I've been dying to go since I saw this.

I'm glad Matt mentioned that color process. It caught my eye. It's nice to be a casual consumer of the product, but see the world a little more like a connoisseur might; Where coffee is always in the foreground.

interview with the guy behind the new intelli vids, DDDD https://fwdlabs.com/blog/building-relationships-with-online-audiences/

[…] one of the filmmakers who authored the visions in Spielberg's "Minority Report" (see our past post, "Building Relationships with Online Audiences"), recently followed up to their Intelligentsia coffee profiles. For AEG | Electrolux, specifically […]

[…] Building Relationships with Online AudiencesOur interview with The Department of the 4th Dimension founder Matt Checkowski tells an inspiring take of the Intelligentsia coffee videos, which led to numerous follow-up projects […]