Writing Interactive Film for the iPad 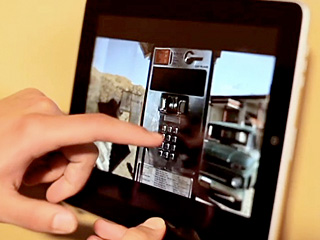 “Touching Stories” is a four-film experiment in short interactive filmmaking for the iPad, which got attention at this year’s Cannes Lions festival. Tool of North America had five directors working in collaboration with Domani Studios to make the project, now available on iTunes.

One of the shorts is shot in first-person. “You get to dial a pay phone, retrieve keys from a woman lounging in a pool, even shake the iPad back and forth as you’re running in order to put some serious distance between you and your would-be attackers,” notes the review in Fast Company magazine. “[The iPad] brings storytelling to a completely new level because you’re completely in control of the experience,” adds director Jason Zada, who co-wrote “All Ends, Ends All” with writer Tim Immordino:

How did you get involved with “Touching Stories?”

Tim Immordino Jason Zada (co-director of “All Ends, Ends All” with Erich Joiner) and I have been collaborating on various projects for a couple of years now. He asked me to come in and write with him, and bring my particular spice to the concept.

What’s it like to collaborate again with director Jason Zada?

TI It’s great. We’ve worked on several things since We All Float On, our web series, and at this point there’s a level of comfort, understanding, and brutal honesty that serves us well. Of course, he’s a visionary when it comes to new media, he’s a huge mentor to me in this space.

With co-writing “All Ends, Ends All,” what’s different structurally? How do you go about writing for interactive, “choose your own adventure” stories?

TI Storytelling is storytelling, you need a beginning, a middle, and an end, and it needs to be character-driven, etc. Obviously we couldn’t have a million choices for each action, so basically, there’s one correct answer which beings you to the next event / part of the story, but in taking the other paths (for example, when you dial numbers on the pay phone trying to find the right one) the world this character is living in becomes more fleshed out. You hear other characters and learn bits of their stories, its suggested he’s in a complete and seamless world. That said, the one thing you want to make sure of is that these false solutions pay off in some way, they don’t last forever and squander the beat. Its still a film, after all, so we can’t hang out between beats forever. In other words, it may take three or four calls to get the right answer in the example above, but the story arc is the same, and all those false solutions serve the story.

What were some of the challenges to overcome in terms of leading the user’s navigation and the usefulness itself of the interactivity?

TI There were all the usual challenges of production – we were losing light, etc, – but when you’re shooting video for interactive, things also have to read in a way that the user is drawn to interact with them. Its easy enough to give hints on the screen, lead people along, but the ideal is to find elegant ways of doing things which feel organic for the user. Jason is a master at this, and the iPad itself helped a lot with its large, visual interface.

In terms of its usefulness, interactivity works really well to tell some stories, not as well with others. You can make an experience richer, but its also easy to just get in the way and have roadblocks to the audience’s immersion, which in theory is the exact opposite of why we use interactivity in the first place. The litmus test, in my opinion, is somewhat similar to what we ask ourselves when writing for traditional media. That is, does what we’re doing enrich the experience, help us to be engaged, suspend disbelief (i.e. does it serve the story)?

The allure of the alternate ending. Especially with the inclusion of hints and easter eggs, this gives new meaning to watching again. How did repeat viewing factor into the writing process?

TI That’s a good question. Jason actually had the very cool idea of not changing the ending, but instead allowing the user to switch perspectives near the end, and on the fly. As the tension mounts, suddenly the user is allowed to see both sides, from the POV of both the hunter and the hunted. When you take a minute to think about how in the traditional narratives, strong storytelling usually involves building some degree of empathy for the antagonist as well as the protagonist, allowing the viewer’s actual POV to straddle that line can be very compelling.

With interactive content, what’s the one thing that everyone should do?

TI User experience is so important. I think taking it into account when thinking about the beats, how this thing will play out with timing, tension, etc is key. There are not a lot of hard and fast rules, but UX is one of the things that should guide you.

The iPad is one of the latest distribution platforms for film. With the iPhone and its GPS, we had location-sensing experiments like GPS Film. Regardless of platform, what interactive stories in the past do you admire and why?

TI Off the top of my head, in the traditional (if we could call it that) stories told in the interactive space one of the coolest things I’ve seen in the last couple of years was a site called Hotel 626. It was produced by interactive producer extraordinaire Maggie O’Brien, who also worked for Jason at EVB back in the day. I thought it really delivered on its promise of immersion, it sucked the user in and there were surprises around every corner. Of course we could also talk about video games like Red Dead Redemption, etc.

What has me excited now is the possibility of mixing interactive storytelling with real-world interaction, somewhat like the link you share above. There have been a lot of web 2.0 stunts like the Livestrong Chalkbot, and Amazing Race-type things, but I’m particularly excited right now about the possibility of creating fictional narratives which live alongside us in the real world.

Where do you think interactive cinema is headed?

TI I have no idea. Maybe more non-linear storytelling, or allowing the audience to live within a film or show, explore that world in real (film) time as the story moves forward around them, play with time, replaying events from different points of view, etc. I think there are a lot of different directions it will go in. Or maybe “movies” will live in our reality, and vice versa, per my last answer. It’s obviously still in its infancy, but I’m excited about the possibilities.

[…] Writing Interactive Film for the iPadWriter/director Tim Immordino works on a cutting-edge project with Tool of North America, where touching the device evolves theÂ story […]

[…] People's Voice nominees for "Best Use of Mobile Video" includes "Touching Spaces" (fwdlabs.com), a film series for the iPad produced by Tool; vote at […]