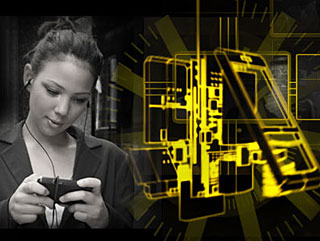 “Movies as derives,” notes D. Scott Hessels, media artist and filmmaker based in Singapore, on his Facebook. His latest work, GPS Film, is open-source software for filmmakers and developers to create stories for places. Instead of passively sitting in a theater, a storyline unfolding before your eyes, this experiments with the storyline being revealed by your path and the film being shaped by your surroundings.

Developed in a collaboration between engineering and art students at Nanyang Technological University’s School of Art, Design and Media, where Hessels teaches, the open-source software allows developers to “create story spaces as small as parks and as big as the globe.”

Geotagging is a central idea for this interactive experiment, but also walking through spaces on a derive. Similar to Baudelaire’s theory of a flaneur, French writer Guy Debord penned a Situationist essay called “Theory of the Derive” in 1958. He described a derive as the action of an individual to “drop their relations, their work and leisure activities, and all their other usual motives for movement and action, and let themselves be drawn by the attractions of the terrain and the encounters they find there.”

The first GPS film is the Singaporean chase comedy “Nine Lives,” written and directed by Kenny Tan and executive produced by D. Scott Hessels. The story involves nine neighborhoods and “how a confused exchange of 3 duffle bags at a public busstop causes a hapless office worker to be running from both the Police and a dim-witted crime gang.”

While the trailer is on YouTube (embedded below) and Vimeo, the entire film will soon be available for free online with the Windows Mobile software at GPSfilm.com. Walking the central business district of Singapore would demonstrate the artwork.

Several of Hessels’ previous work mixes cinema with emerging technologies, such as Brakelights, which I had the pleasure of shooting. His feature documentary film, The Pikme-up, was also a collaboration with P. James Keitel.

Related, the subject of watching film on mobile devices is polemic, especially if you ask filmmakers like Spike Lee and David Lynch. Developing applications, especially for the iPhone, is an up-and-coming gold rush, too. Geotagging, video and mobile have come together before: in theory with MIT’s M-Views (PDF) and in user-generated content on Flickr, Motionbox, and YouTube, which allow geotagging videos.

This type of cinema has an immediate advantage over normal cinema. Participant/viewers have to move around. And that should burn up quite a few more calories than sitting in a seat at the movie theater.Source

Thanks Aaron…you’re the only one who caught the derive connection. The press release for the artwork is 4 September here in Singapore and we hope it takes off. Nice article…appreciate it!

Scott, glad to elaborate on the connection. I look forward to seeing more coverage about GPS Film with the formal announcement in September. It’s always nice to dig into the details of your latest works!

Tris, thanks for your comment! I’m glad you’re enjoying the posts.

[…] and write a longer piece in the near future.GPSFILM "The Using Of" from GPSFILM on Vimeo. Location based mobile cinema – Fast Forward – FWD:labs.Original Post: […]

I work for a company taking mobile cinema to rural locations with manual projectors still in 2D and I cannot believe technology is at a stage where this is now possible, I can't wait to get watch the proper version, 'Nine Lives', will take cinema to a whole new level.

Thanks for visiting and adding a comment! Given that this post is over a year old, I know that Scott and other innovative filmmakers are certainly embracing mobile and rural cinema. I look forward to what ruralcinema.net is doing, too.

[…] platforms for film. With the iPhone and its GPS, we had location-sensing experiments like GPS Film. Regardless of platform, what interactive stories in the past do you admire […]