Video on Facebook is Getting Better, But It’s Missing One Key Feature 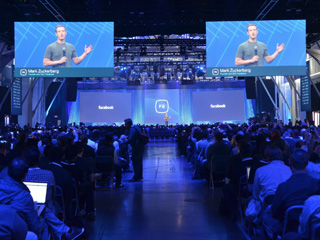 While Facebook has been a valuable marketing tool for films and filmmakers since 2008 when they rolled out Facebook Film (since re-named), Facebook has still been considered a “walled garden” that’s painful to search and continues to play catch-up to many other video delivery networks.

At the first of two days of the F8 Conference, Facebook announced a few worthwhile upgrades that are relevant to filmmakers and, more specifically, anyone uploading video within Facebook instead of embedding or linking another video (e.g. YouTube, Vimeo, etc.).

Here’s what caught our eye in yesterday’s announcement on brand-new ways to use video on Facebook:

Here’s a punch-list to get up to speed on how video on Facebook can help filmmakers:

Finally, in rare circumstances, some filmmakers or film companies may be invited to participate in “Facebook Live,” which is essentially a comment box alongside a live-streamed video but isn’t a feature that’s available to the general public:

But what’s wrong with all of the above? Show me the money.

What’s still missing from Facebook is monetization. Facebook “likes” and “views” may appear to be good, but still not in the pocketbook.

“The new stuff looks great but at the moment it’s vaporware. There’s a huge ecosystem around YouTube,” notes Daniel Keywan Hollister, who works at RocketJump and is a co-founder of 5-second Films. (By ecosystem, that’s referencing the search, users, money, and services that YouTube provides.)

“If we got a ton of views on Facebook and then those people didn’t watch it on YouTube, we’ll have lost money and the view count. We may put stuff on Facebook if we can still monetize it the same and whatnot, but there’s still so much more than just that over the last few years, especially for bigger channels like RocketJump. There’s a lot of merit to the ‘long tail’ effect and having our stuff everywhere, but there’s also a huge value to being a juggernaut on YouTube even if we’re nowhere else.”

Any thoughts on Facebook’s move with video that may help or hurt filmmakers?