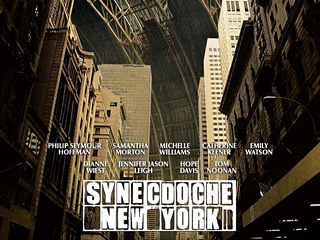 Charlie Kaufman said he always thought “Being John Malkovich” would be a sample. What happened instead was that it got made. Kaufman then gave us the off-beat “Adaptation.” He has experimented with the weird for a while but his magnum opus is now “Synecdoche, New York.”

“Synecdoche” is distinctly Kaufman but also as weird and refreshing as Lynch. It’s a movie you can see multiple times and have a different experience. It makes you wonder. Lately, cinema doesn’t let me wonder. It lets me know the bad guy is dead and the good guy gets the girl. However, I always knew that would happen. With the work of people like Kaufman, I never know. That is different. That is a real film experience.

People should tinker with symbolism, darker themes, and the unknown. If injected into a more conventional piece, it adds some edge. Or if it’s a writing experiment, it would be cool to have a trippy sample in your deck of cards. You can let your work flow and not be as worried about plot points and act structures.

A published poet and friend of mine, Stephanie Valente, took a stab at a semi-surreal script and managed to come full circle in a month. “The Space Between Dreams” is a feature script that is as tight as most thrillers, about falling in love with someone in your dreams and how to make those dreams a reality. It’s a refreshingly different read than most scripts floating around out there.

Everyone should feel okay with writing something different. I think it’s a very liberating experience for writers new or old to just go for it. It helps you grow as a writer and makes you think differently in the future.

You’ll have to see “Synecdoche, New York” for the full effect, but right now you can get inspired with the WGA’s Charlie Kaufman interview (embedded below), Wired Magazine’s two-and-a-half-hour interview, or Creative Screenwriting’s hour-long podcast.