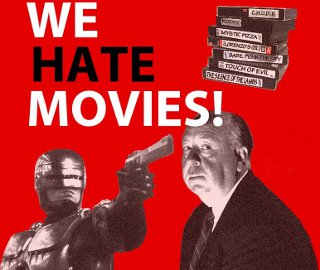 'We Hate Movies' got featured early on by iTunes despite initially poor sound quality, building an initial following

A major part of screenwriting is having an ear for dialogue. This is particularly true with comedy. In a drama, you can write a monologue for a character but it better be moving. In comedy, you can write quick-witted dialogue that goes back and forth between two leads, but it better be well paced. It also needs to be “quick-witted.” Having experience actually giving a heartfelt speech like a eulogy might help hone your dramatic chops, just as getting up there and trying to make people laugh will hone your comedic ones. See how I mentioned a funeral and pursuing comedy at the same time? It’s no mistake, be prepared to die up there. 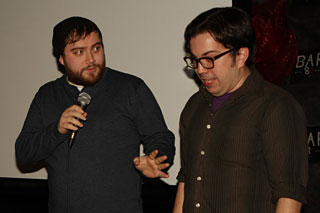 Not every joke hits and it helps to figure out what can be funny with some sort of audience. While, I haven’t tried traditional stand-up quite yet, I have been making a podcast with several friends. Andrew Jupin came up with the idea and got myself, Steve Sajdak, and Chris Cabin involved. The subject? Movies. We riff on bad and forgotten movies and see where we go with it. We’re not MST3K, this isn’t for listening while you watch. You don’t even need to see the movie. We discuss the plot, the “world” of the movie, and get into interesting and off-beat tangents often unrelated. The conversation is usually us cracking each other up but you’ll notice when we see a lull we just keep going. That’s what you need to do with comedy, if something didn’t work, don’t look back. When you write comedy screenplays, you have to use the same idea: don’t be precious with your words. They’re jokes for a reason. If you can’t make one work immediately, you probably won’t ever make it work. You can’t labor too much because the spirit of comedy is in the moment.

Getting out there, trying stand-up, improv, or in my case: podcasting (the cowardly route) will give you more confidence in your sense of humor. Our podcast “We Hate Movies!” is available in iTunes and we have fans on Facebook and Twitter. Our reviews on iTunes, star ratings, and Facebook comments have really shown us that we are funny, we’re just not getting paid for it yet. That’s a great feeling to have instead of just writing scripts you find funny and hope to be funny. When you do it with an audience, or even a delayed audience (like a podcast), you’ll still ultimately get a real reaction from it. Sometimes when you write, those words drift into the ether, and you have no idea if a reader laughed at the same parts you did. With live and even recorded comedy, you get a reaction. And it’s great to know where you stand.

Our first episode was initially panned on iTunes due to having poor sound quality. Part of that was my fault, before you record, learn how to hold that microphone and project! That’ll be the only way people can hear your brilliant line saying something is “the ‘Triumph of the Will’ of bio-pics.” It also helps to make investments if you do decide to start podcasting. Look into foam microphone covers to help get the best audio you can. However, even if your audio sucks initially, you can still get fans. Those first few negative reviews actually still really enjoyed the episode. As you keep going, keep improving the show. Everyone will appreciate the effort.

Your podcast could get lucky like ours. We uploaded that initial poor sound quality episode as a test on iTunes and got featured as “New and Noteworthy,” even breaking into the top 200 comedy podcasts that week. That helped build us a core group of listeners but we have built on that even further via social networking. Plugging on sites like Twitter and Facebook can be essential. However, I try not to bog down my Twitter feed with all plugs. I try to be funny with other things and talk about screenwriting on Twitter in between selling myself and selling the show.

It also helps to have a great group of creative people supporting one another. Andrew Jupin and Steve Sajdak have worked on several web shows together including Sex Personified and Date Night, Kinect Night. Chris Cabin is an accomplished film critic (he’s even gotten praise from Roger Ebert!) And me? I’m just a writer who traded the pen for a voice several hours a week.

I think performing is a great way for a writer to really progress and become greater than he or she has ever been. You’re no longer just writing for a character you’re imagining, you are that character and have to make funny happen, in the moment, behind a microphone.

Fantastic commentary, Eric. I think your deliberate practice with recorded banter like this will fuel your next project’s authenticity. I’m sure your conversations with friends are different than how you converse with your co-stars on this show, even though it’s real. Are there any specific “a-ha” moments you had hearing yourself say a one-liner? Have you revised any of your scripts after having started this show?