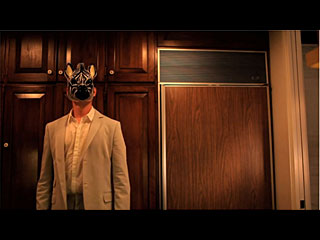 Branded content is reaching new industries, ones where the client wants video to reach an audience with ease and a budget that needs to last for a while. Here, it’s a luxury hotel, high-end chocolate maker, kitchen appliance company, and lingerie boutique that are embracing quality, creative video content for the web.

Instead of showcasing their rooms or pools as-is, each video from Parker Palm Springs — used throughout their website — has a perspective and plays out like a vignette from a feature film. On the “Play” area of the site, the video follows a man who plays a losing game of tennis catches the eye of a woman. She lures him through the property to share a lemonade. Another — for the Gene Autry suite — watches a masked man enter a room of other masked couples and, en route through the suite and its kitchen, finds a single masked woman who takes his hand.

The campaign’s creative was done in-house, with the film production hired out. The videos are only available on the website, although they’re hosted privately on Vimeo.

The Scout produced a short documentary about this New York-based chocolate company. Although the film is missing from their official site, the work by director Brennan Stasiewicz and DP Ed David plays like a well-told company overview.

The video is part of a series for the magazine, reminiscent of Pentagram video by Hillman Curtis, who is one of the forerunners in making short films for the web.

The design studio Department of the 4th Dimension (DDDD), helmed by one of the filmmakers who authored the visions in Spielberg’s “Minority Report” (see our past post, “Building Relationships with Online Audiences”), recently followed up to their Intelligentsia coffee profiles. For AEG | Electrolux, specifically with chef Jack O’Shea as a series on the Perfunkt.com portal, which was created by video producer HUGE Inc., DDDD shot a handful of videos showcasing the culinary artisan going through his process.

Check out how O’Shea selects his meat or the overview teaser below:

No stranger to a web video strategy, where one intimate ad wrangled 45 million hits over three years, Agent Provocateur teamed with director Johan Renck and producer RSA for the “Private Tapes” campaign, which launched this month. The press release describes the 25-second videos as a “seductively voyeuristic experience, though the viewer is in no doubt that the woman is empowered and entirely in control of the recording.” The home-video look highlights the parallels to the rise in point-of-view experiences brought on by webcams, cell phones, and consumer cameras. See all the “Private Tapes” or below for “Gangster Slip,” one of the ads:

[…] [Dailies] Creative Videos for the Corporate WebOften cited in our productions, these examples show off story videos that work for small businesses to stand out from theÂ pack […]

These videos are really suitable for corporate websites. What I like the most is the video of the Mast Brothers.