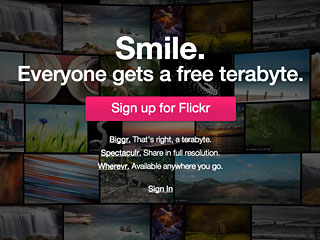 The new Flickr landing page trades in a featured photo for a giant freebie: 1TB.

What’s happening over at Flickr? Theyâ€™re sporting a new look and giant storage limits, but many are questioning whether theyâ€™re really helping to push forward the photography industry. Their new CEO is saying “there’s really no such thing as professional photographers anymore,” just different skill levels, she’s clarified.

Well, that’s one way to run one of the largest photography social networks in the world.

In the same day parent company Yahoo announced their $1billion acquisition of Tumblr, the company unveiled the new Flickr, which prompted some to claim the company proved themselves to be “awesome again.” 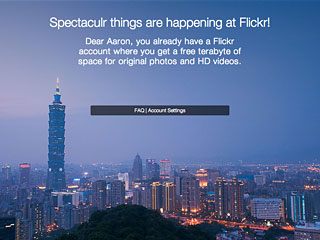 What was once Flickr Pro is now a not so “spectacular” change.

Flickr “Pro” is now gone. Feedback on the updates from the pro subscribers who were paying $25/year appears to be universally negative. Missing from the new service is one of the key benefits of an upgraded plan: stats. Unlocking data is one facet of business models for web apps, including ours.

Now, according to Flickr, paying $50/year just removes ads, which previously was part of a $24/year plan. Paying $500/year gives you two terabytes, when that same $24/year bought you “unlimited” space. (Tip: 1TB external drives sell for $100 nowadays.) Gone are other nuances like the little “pro” badge, which gamified the tiers of service. You wanted to be “pro” — but now on Flickr nobody is.

Not everyone is disgruntled with the changes. USA Today praises the update. PC Pro Blog points out some pros to the updates, including the fact that the “old 300MB-per-month upload restriction has gone for free accounts, and you can also upload Full HD video clips of up to three minutes in length.”

However, for old and new “pro” users alike, PetaPixel.com points out that Flickr grandfathers some accounts over to the ad-free plan at a reduced rate.

These changes may have done more harm than good to Flickrâ€™s business model. On the official Flickr forum, there are over 17,000 posts on this change up, which are mostly from long-term, paying customers who feel cheated.

Why so many big changes to Flickr all of the sudden? According to Techcrunch, CEO Marissa Mayer was most interested in no longer offering “degraded” images. That said, web files are 72dpi and JPG is very much a compression of RAW. So is it really accurate to say they’re not degraded? The photo canvas is now just massive and embraces a responsive web design approach, scaling for screens large and small.

With this reboot, which marks the first major change since the 2005 acquisition of Flickr by Yahoo, they’re reinvigorated some competitive metrics like the storage space, but relegated paying for a premium service to two extremes: no ads and double the space. Both of those features used to cost $25 per year and, in an age where data costs less, now they’re $50 and $500, respectively. Not very slick, Flick.

(See our prior article, “Why Did Final Cut Drop Pro?,” for more about dramatic changes to business models for web services.)