More Than Fair Use of Shepard Fairey’s Obama HOPE Poster 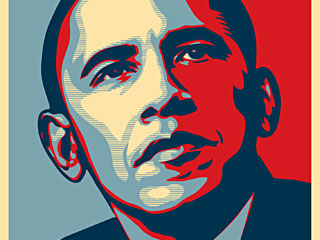 I just listened to Terry Gross’ interview with both Shepard Fairey and the photographer (an AP stringer, Mannie Garcia) that took the photo that Shepard used to make his Obama HOPE poster. The situation is getting pretty interesting. The AP demanded Shepard pay for his use of the photo, Shepard agreed but when the AP demanded royalties PLUS damages. Shepard instead decided to file a preemptive lawsuit, claiming he used the photo under the copyright Fair Use Act. On the other side, Mannie Garcia is also having a legal battle with the AP over who holds the original copyright, and therefor who is allowed to profit from it.

My opinion is conflicted, because although my selfish initial reaction is that the rights of the photographer should be protected no matter what, I really think that Shepard has a strong case, for the following reasons:

If it wasn’t for Shepard, that photo would’ve been just like thousands of others, and fallen into obscurity. If anything, I think Mannie should be sending Shepard one hell of a gift basket.

It’s a pretty interesting interview if you have any interest in this situation. The interview was on Feb 27th. Listen to the interview on NPR.org or scroll down a little at learnoutloud.com.

P.S. Terry interviewed Shepard on Inauguration Day, which is a great interview too, but I can only find that one on iTunes.

While I tend to also think it should be considered a fair use, Shephard’s lying about the origin of the photo makes me hope he loses:

Greg, great to hear from you on this. It’s been a long time since CSB. Nice addition with the link!

Interesting update to the Shepherd Fairey story. Apparently he is not above suing other people’s fair uses:
http://gawker.com/5166157/obey-trademark-law

Aaron, definitely been a long time. Looks like you are doing really well!

Greg, thanks for the update! This is quite a drama to follow especially regarding intellectual property, which I saw on Facebook you’re getting your latest degree in!

Keep the links coming; this article is getting quite a bit of viewers since it went up…

[…] Art as a creative force is increasingly common. We've seen popular images become a focal point in the media increasingly recently: Barack Obama in 2008 and now this in 2010. (See our post on Shepard Faireys' artwork.) […]

[…] Related, check out our commentary on Shepard Fairey's Obama. […]