Behind the “I’m With COCO” Movement 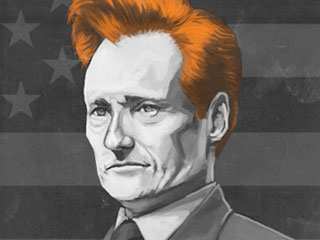 It all began with a late-night tweet — “what do y’all think of this?” — and the “I’m With COCO” movement was born. The tweet’s author and “Coco” artist is Mike Mitchell, a twenty-something Los Angeles resident who recently quit his job to work as a freelance artist.

Mitchell woke up the next morning to find it was literally an overnight internet sensation. “I do a lot of pop-culture based stuff,” he explains, “but nothing has gotten close to this. I got woken up by TMZ this morning,” noted the Village Voice.

In an interview with People, he added, “I finished the design and sent it off on Twitter, and I woke up the next day and it had started. It already had wheels and it just blew up from there.” Mitchell has now thrown himself into “I’m With Coco” full-time, not just to support O’Brien but to support charity. A dollar of every order at the online “I’m With Coco” shop goes toward Planting Peace, which is helping relief efforts in Haiti.

Support on Facebook alone extends between six pages, totaling over 590,000. Each uses Mitchell’s artwork as the icon of support.

Art as a creative force is increasingly common. We’ve seen popular images become a focal point in the media increasingly recently: Barack Obama in 2008 and now this in 2010. (See our guest post on Shepard Faireys’ artwork.)

Is this kind of movement a trend? Or has it always been there?

(Thanks to screenwriter Eric Szyszka for the topic.)