Behind “The Look Down” 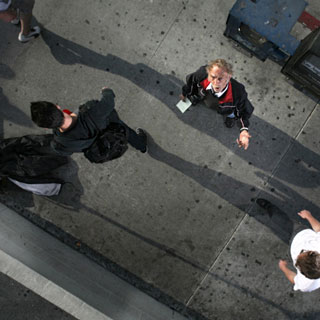 Shooting 14-feet in the air

This was an assignment for the great collective â€œThis Is A Photo Blogâ€, which I am proud to be the newest member of. The assignment was from the talented Lauren Randolph – she wrote, â€œPerspective – Letâ€™s mix it up by shooting down on or directly up at something. Change our point of view!â€

I knew immediately I wanted to shoot on the streets, and my instinct right away said Santa Monica and Western. Itâ€™s one of those intersections that is filled with life, no matter the time of day, plus it has the most unique crosswalk in town. Initially I was going to try to climb to a roof or billboard to shoot down, but then I decided to take it a step farther and rig the camera on 20 feet of speedrail, hung between two medium rollers, with a 7B mounted on each of the rollers. This gave me a lit field of about 14â€™x14â€™ that I could capture perfectly with a 24mm lens from 14â€™ in the air. 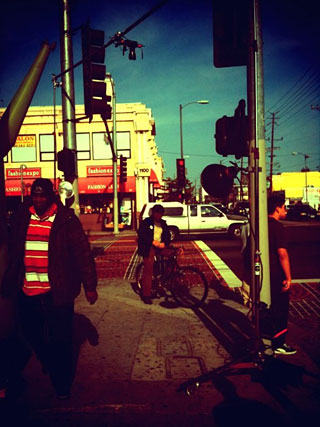 Our rig at Santa Monica Blvd. and Western Ave.

The first hiccup came when me and Nathaniel (thanks again for the help bud) got to the location and set up the rig. The cable that would allow me to trigger the camera from the ground with a pocketwizard had somehow developed an electrical short between the rental house and the location. Lesson learned, now Iâ€™ll always carry two. BUT, our shoot was toast, right? Close. Fortunately, I had the Canon intervalometer in my camera bag, which enables the camera to fire off a set interval. So, it wasnâ€™t ideal, but we rigged it so I would start the camera firing when the rig was lowered, and then weâ€™d raise it up and do a round of captures. Shoot saved.

The next challenge was just pushing a massive rig with an expensive camera on top around a busy street corner. And if that wasnâ€™t enough, I decided the prudent thing to do would be to cross the street with the rig a few times. Suffice it to say, we were a bit of a spectacle, but it was all in good fun, and I think the shots were unique! Iâ€™m already looking forward to the next @TIAPB assignment.

Any questions? Feel free to ask.

These are fantastic shots! I love how you’ve captured people’s shadows.

Thanks very much! There’s nothing like a *real* 5 o’clock shadow…