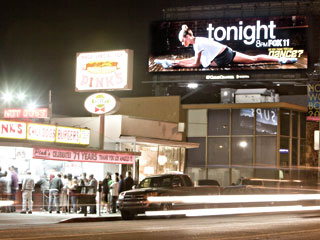 I set a goal to have a billboard up in Los Angeles by the end of the year, and here in June I’ve got my first.

It was a long journey. I started as the behind the scenes photographer for the auditions of So You Think You Can Dance three years ago. It was one of my first assignments for FOX, so I went all out and brought a medium roller rigged with a p50 magnum on one side and a beauty dish on the other (so the same rig would work for portraits of dancers inside and out). I got great feedback from the show’s publicists and the next year I was asked to shoot the live show. This was a new challenge for me: over the previous year I had spent a lot of time on set photographing all sorts of TV shows, but nothing with the energy, excitement, and stress of a live show. I suppose it’s a lot like shooting a sporting event, except that instead of dozens of photographers all capturing the event, I was the only one shooting the show each night, so if I was to ever miss a shot, that shot simply wouldn’t exist. It was pressure, but fortunately I love pressure. 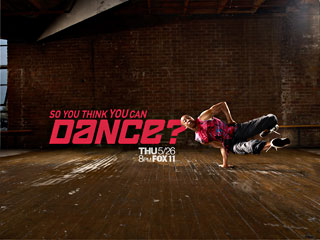 At the same time that I was working on sets of TV shows, I was working on my lighting and group portrait skills, and the next season I was asked to shoot the publicity gallery, which was an incredible opportunity. I started my photography career as an assistant on these types of big publicity shoots and had always wanted to walk on set one day and know that it was going to be my eye behind the camera. Five years later, it was finally happening.

But, it wasn’t until this year that I got the call to work on the marketing campaign. It was going to be a challenging shoot because we were piggybacking on the motion commercials they were shooting for the show. Same location and same models means saving money, but it also means a much more hectic day as two crews balance around each other to get everything they can in the time allowed. And of course, since the photo shoot was happening at the good grace of the motion shoot (who was footing the majority of the bill), we had to defer in terms of locations and timing. But we thrive on challenges, so in the course of the day we managed to shoot 5 different models in 4 different set ups. Not bad.

We got great feedback on the shoot, but of course we didn’t see anything for quite a while as the creative wizards at FOX worked their magic on the files. Then one day, driving up La Brea, boom, there it is.