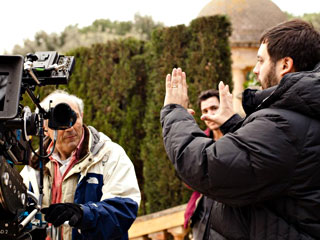 Joseph White Lighting-wise I think it’s one of the best things I’ve done. We had some truly spectacular locations – making Barcelona look bad is a bit like failing gym class. So much history and texture surrounded us at all times, the city itself was a constant source of inspiration. This was the second film I shot on the Arri Alexa and even in harsh situations it held up brilliantly. It’s a very contrasty film and the camera lent itself to that style. My gaffer Oscar Felices was nothing short of brilliant, and his crew was equal to every task presented to them.

What’s one thing you learned — before, during or after production? 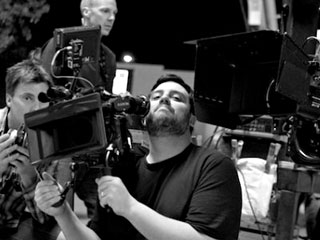 On the set of "Mother's Day," where Joe also worked with director Darren

JW I guess I’d say the thing I’m learning more and more after every movie is to simplify, simplify, simplify. No matter how elaborate I want something to be or how precious I want to be with lighting, if it’s not explicitly telling the story (or more often helping the director make his or her day and get the coverage they need) it’s the wrong choice. When I started I was so excited by sexy sculpted lighting and complex movement (and don’t get me wrong I still strive to do a lot of both) whereas now I’m a lot more conscious of what the film as a whole needs. I’d also say to any aspiring DP to pay really close attention to your actors’ desires and instincts – don’t show them where to go, let them take you there and make it look right.

How has the changes in film technology affected your work — for better or worse? 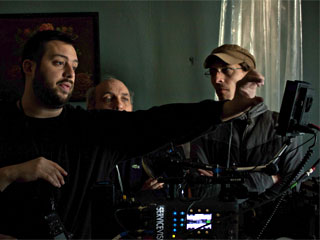 Joe with his crew

JW Technology is always advancing and even though I still love a lot of the tried and true methods and techniques, cinematographers who are obsessed with the past don’t have much of a chance being a part of the future. I’m a fan of the technological developments that have broadened the canvas of cinematography, but there are some troubling notions coming from the top about new HD cameras not needing to be “lit” as much. I think no matter how many lines of resolution you have and how small the cameras get, our craft is still telling story with light, movement, and composition and every new development, in the right hands, pushes the medium forward. I’m also a huge fan of things getting smaller and cheaper, as the more pluralized and democratized film production gets, the more of a pure art form it becomes. The easier it is for people to get their hands on a camera and editing software, the more stories from diverse and previously marginalized sections of our population will get told, and that can only be a good thing.

What’s it like working regularly with director Darren Lynn Bousman? 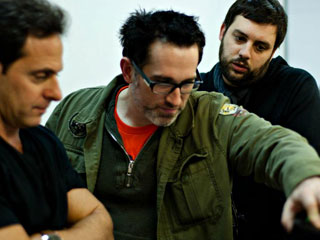 JW Darren is an incredible collaborator – “11-11-11” was our third feature together and we recently wrapped our fourth film “The Barrens” with Stephen Moyer, shot on Super 16mm in Toronto. Working with Darren is fantastic – he trusts me enough to know that I’m going to work tirelessly to give him what he wants, yet he always gives me the freedom to experiment and push the envelope. We went very dark with some of the scenes in “11-11-11” and his trust in me and what I do allowed us to get some pretty stark and unique images.

What are some of your regular influences for creative ideas?

JW I try not to emulate, but I’m always inspired and I try to devour all aspects of the visual arts when I’m prepping and shooting a film, not just movies. I think it’s important as cinematographers and filmmakers in general to not just limit ourselves to the medium we’ve chosen when it comes to inspiration. When I read a script, I think about music, about still photography, painting, sculpture, food, scents, everything. The broader our frame of reference is as artists, the better at communicating those ideas to our collaborators and, ultimately, our audience we will be. There are so many cinematographers out there whose work I find amazing, and I consider myself incredibly fortunate that I get to do this for a living.

What next — both for you and for filmmaking?

JW I just completed principal photography on “The Barrens,” which was a really fun project that I think people will really get into when Anchor Bay releases it theatrically next year. I’m reading some scripts now and will be shooting something in January or February. As for filmmaking, I have no idea — and that’s what is so exciting. I just want to be a part of it!

Watch some of Joe’s work at josephwhitedp.com and his witty commentary at @tableforjoe, which is how I met Joe before grabbing some coffee in Silver Lake. The film “11-11-11” comes out today and you can check out the trailer, embedded below.

[…] Making "11â€“11-11"DP Joseph White's own words on the psychological thriller, including the lessons to simplify and to observe actors' desires and instincts […]