Derek Cianfrance, director of “The Place Beyond the Pines,” “Blue Valentine,” and a milieu of documentaries, recently helmed spots for Dick’s Sporting Goods that dare to use single-shot storytelling to hawk their goods. In between “Pines” and his next film, “Cagefighter,” he’s also done some work for Chrysler, Nike, and Grey Goose.

From a director well versed in long tracking shots, these two commercials are well played amalgams of cinematic filmmaking brought over to brands that want stories with their products. 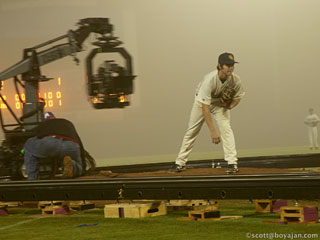 Check out some behind the scenes photos taken by Scott Boyajan, post producer for the spot, which reveal how they rigged the dolly.

Client: Dickâ€™s Sporting Goods
Spots: “Every Pitch” and “Every Snap”

@radical.media director Derek Cianfrance shot for two nights at Blair Field, a college park in Long Beach, Calif. In the end, they used a take from the first night, when a lifting fog gave the air an ethereal quality. Cianfrance used zoomsâ€”something of a forgotten art. “We were looking at old Westerns and the way they used zooms,” Jacobs said. “We all felt if you could do it with zooms in one take, moving around on a dolly track, that you’d get a much more real, on-the-field feeling, instead of going all digital with spidercams and crazy stuff like that.”

Each spot was lensed by DP Peter Deming ASC, who had just shot “Oz the Great and Powerful” and its sweeping long takes, among other studio films. Interesting footnote: no Steadicam used for either effort. 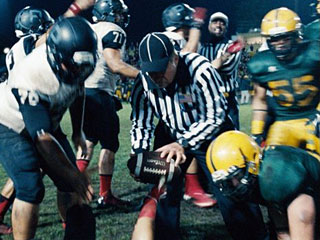 The football one took the same crew, but a different approach. Creativity noted the following:

According to Anomaly Creative Director Seth Jacobs, while the baseball spot Every Pitch used a motion control dolly track, the football ad required a tricked-out spider cam. “We kept it inches from the ground and had to customize the rig to make this possible,” Mr. Jacobs said. “A deflated soccer ball was inserted into the rig to act as a shock absorber to help make it smooth.”