Working for the Small Screen 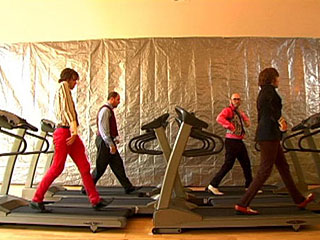 “Think Fellini on acid,” notes NPR’s art reporter Neda Ulaby. She’s watching the “I Write Sins Not Tragedies” video from the band Panic at the Disco, directed by Sean Drake.

“When I make a video, I just assume the majority of watchers are going to be on the Internet … IM-ing someone in a chat [while] … doing some other task on Word and checking their Facebook,” Drake told NPR for today’s Morning Edition program. The “Sins” video won Video of the Year at the 2006 MTV Video Music Awards.

As YouTube (and a dozen others) change the game MTV started, videos themselves are less about big edits, big sets and big cinematography. It’s the oft-simple concept that triumphs all.

Ulaby cites OK Go. “In 2006, the band was relatively unknown when it created a video viral sensation for the song ‘Here It Goes Again.’ The video shows the band members — center-framed and well-lit — on a simple set, dancing on moving treadmills. They glide past each other like ice skaters and slide through each others legs.”

To listen to the podcast, read a full transcript, and link up to more videos like Michael Jackson’s “Thriller” or Beyonce’s “Single Ladies (Put A Ring On It),” visit NPR.org.