From a recent Fast Company article, “Why David Fincher Is the Best Design Thinker in Hollywood,” by John Pavlus: 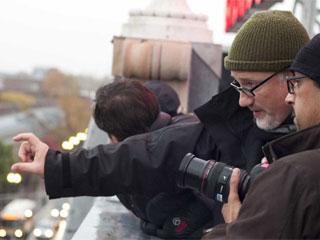 Calling a director a “designer” is almost a tautology: indeed, anyone making creative choices about what to leave in or leave out, in any medium, is designing. But Fincher’s coolly intelligent eye, laserlike attention to detail, and (in his best work) apparent fascination with storytelling as problem-solving, all set him apart from other filmmakers as a true designer-auteur. He makes films like Jony Ive makes iMacs: They just work — with style to burn.

Take The Social Network. Fincher has said in interviews that he personally related to Zuckerberg’s character: the young punk who thinks he’s smarter than everyone else in the room, and actually is. (Makes sense: Fincher was directing Madonna videos when most dudes his age were still playing video games in Mom’s basement.) But the film is a classic Fincherian puzzle, too: is it possible to make a film about pasty dorks tapping away on computers into something visual? That’s a design problem through and through — a product-design problem, no less. (That analogy to Ive was no accident.)