What K-Swiss Can Try Because They’re Small, But Does It Sell Shoes? 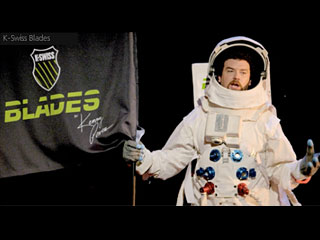 This is one way to try and sell shoes … and an HBO sitcom. Jody Hill directs the latest K-Swiss “Kenny Powers” short [NSFW], “Blades,” with actor Danny McBride and agency 72andSunny.

(The Hill/McBride collaboration, which goes beyond the HBO series “Eastbound and Down” starring the fictional character Kenny Powers, started back at the University of North Carolina School of the Arts in Winston-Salem. (The show began its third season this last Sunday, February 19.) 72andSunny is also behind the provocative Benetton ads, which features different political leaders kissing each other. The spots use FunnyOrDie for its online distribution, whose audience skews older.)

“What attracted me to this company was the fact that we can take risks to get noticed that the other bigger brands wouldn’t take,” said Chris Kyle, the company’s vice president of marketing, who joined K-Swiss from Adidas [in 2010]. “Adidas can outspend us by massive amounts, so our job as a little company is to do our best to make some noise.”

That noise has come at a significant cost. The company is expected to pull in $281 million in sales this year. That means that they do 1/100th the sales that Nike does.

A second campaign followed suit and Fast Company commented on the metrics:

The campaign was notable for a few reasons, not least of which was the simple fact that a marketer was putting its brand in the hands of such a spectacularly non-aspirational (fictional) athlete. But the campaign also marked an unusual three-way co-branding exercise, simultaneously promoting Tubes, season 2 of Eastbound, which was scheduled to launch a month after the campaign broke, and a Hollywood star on the rise.

Powersâ€™ return is an indicator of the success of that inaugural campaign, and not just as a giant Eastbound promo. The videos earned millions of views online (a million on FunnyorDie), resulted in a 1256% increase in Facebook fans and landed the brand atop the â€œbiggest buzzâ€ list in industry trade Footwear News. Perhaps more to the point, K-Swiss also reports a 250% increase in online sales post-Powers.

But take a look at the stock. In an article two days ago on The Motley Fool, K-Swiss is still losing money … fast:

K-Swiss’ abandoning of its bread-and-butter classic tennis-shoe business is particularly disturbing given how long the company has tried to angle the company toward the sportier side of the market and failed. It’s been more than four years now, and in that time the company has burned through a good portion of its cash. In the past six years, it has lost nearly 60% of its revenue.

Are these ads helping save K-Swiss’ bottom line? Perhaps a little bit. Despite being entertaining and opinionated content, and despite being part of a year-long campaign, K-Swiss may be faced with the Old Spice effect: brand awareness isn’t enough for massive changes in consumer behavior. (See our guest editorial from Jack Feuer on this 2010 campaign.)

What hasn’t helped is the management decisions to run K-Swiss like a Swiss Army knife: jack of all trades, master of none. (They spent a bundle of cash recently going after a line of karate apparel.) What has helped is the creative decisions to go over-the-top to help K-Swiss appear like a super shoe. This is totally the right move for a company that needs to go all-in. Does a bump in online sales move the needle of profitability? Despite being a digital world, that’s not enough and perhaps the foul-mouthed approach is a dud. Because at the end of the day, sales is king.