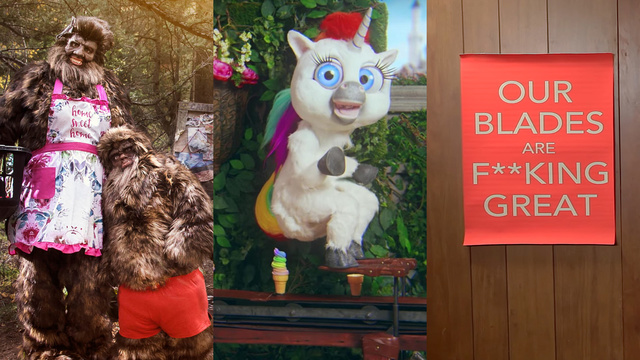 Explainer videos can be predictable. Here’s a look at a few straight-forward products that had out-of-the-ordinary marketing efforts, which in these cases went viral and set them up for success.

One of their recent “Mattress Protector” ad told their product story using a Sasquatch family as the visual hook along with some unpredictable humor.

Big Door made the ad in 2016, which reached 15 million on its YouTube upload. You can also see a behind-the-scenes video for more about it.

“This Unicorn Changed the Way I Poop” cuts to the chase. By using unicorns, ice cream, and Medieval characters, you’re pulled into the absurdity of this all, yet learn about the product and its value in no time.

Harmon Brothers made this ad with 31 million views on YouTube. They note that the company had a 600 percent increase in online sales and 400 percent increase in retail sales. As you can see on their site, they’ve done a few others just like it, such as one for Poo Pourri. Quite the niche market.

In 2012, to debut their company, Dollar Shave Club went with a launch video that took their company into the fast lane:

Paulilu made it with, according to Entrepreneur, a budget of just $4,500. (Ad Age also has a thorough interview.) The video led to thousands of new customers right away and helped boost the company that was recently acquired by Unilever last year for a billion dollars.

Any other favorite viral ads come to mind as oddly intriguing to watch or re-watch?