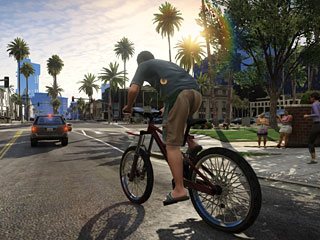 Lens flares in daylight, looking all the more realistic

More and more, video games mimic film as a collaborative storytelling business. This cinematic realism is effective for video games as seen by the profits. Take a look at Grand Theft Auto V, the latest in the controversial yet consistently pushing-the-limits series whose first week profits rival that of blockbuster films. It uniquely sports 3 heroes with mostly * interchangeable storylines that cross each other, but — unlike a linear film’s layered narrative — grants players a giant map to explore, all with story- or curiosity-driven efforts to keep you entertained. (* If you’re wanted by police, or on a story mission, you can’t switch it up, notes one wiki for GTA5.) 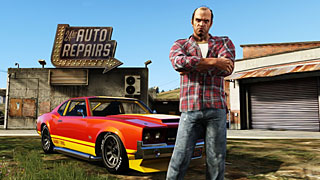 According to theÂ Metacritic’s Game of the Year amalgamation of reviews, over the last 5 years, four of the five are narrative-driven stories: “The Walking Dead” (2012), “Batman: Arkham City” (2011), “Uncharted 2: Among Thieves” (2009), “Grand Theft Auto IV” (2008). Coincidence or a sign of the increasing cross-over with film as applicable?

Game development can cost upwards of $15 million, and games tend to sell around $50 each when reaching consumers. While games are consistently a higher price tag, it’s no $10-15 movie-going experience, providing many more hours of game time narrative in trade for real, face-to-face actors, locations, and production.

There’s also a long shelf life for each game console’s edition, much like DVDs and now Blu-rays discs for films; backwards compatibility only sometimes exists. There’s also a slightly stronger ability to prevent piracy versus video disc media, but part of that has to do with being locked in to having a gaming console (unless you opt to hack your own emulator, of course). 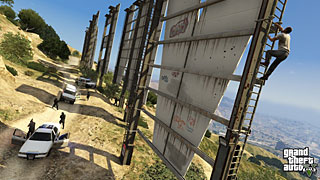 While sports and puzzle games still make for popular video games, even open world games have a narrative mission, and only multiplayer gaming is unique, unlike no linear film. In Grand Theft Auto V, as noted in IGN’s review, driving your ATV too close to a group of hikers might even yield a response — “Typical!” — which likens to a directed, scripted effort, not a programmer’s Easter Egg (such as spotting Bigfoot from a helicopter, collecting Illuminati treasures, and UFO sightings that are hidden in the game).

From the Los Angeles Times: 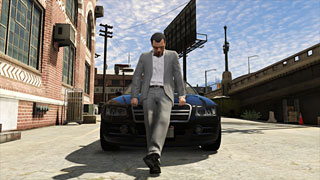 From BusinessWeek, which notes how Rockstar Games spent $125 million to develop, $150 million to market, and it’s not even for a next-gen system. The game is for the 8-year old Playstation 3 and Xbox 360 platforms:

In part, the decision to build for the old consoles is driven by the fact that game developers have gotten really good at it. Aaron Garbut, the art director at Rockstar North, told BuzzFeed that the studio is just hitting its stride when it comes to using the capabilities of the current consoles to do things like replicate convincing-looking daylight. Dan Houser, co-founder of Rockstar Games, told Famitsu magazine that the best games for a console always come out at the moment before itâ€™s overtaken by newer machines:

The fact that hardwareâ€™s so mature right now is exactly why weâ€™re able to go on to the next level. GTA 4 was our first attempt at a new platform and HD visuals, so the first part of development was seriously difficult. Now we know what the hardwareâ€™s capable of, so itâ€™s become a lot easier to move things along and a lot more fun, too.

Will the interactive nature of video games continue to push the envelope of immersive alternatives to traditional narrative entertainment, or will the high production value of film still triumph?