Ups and Downs of Social Video 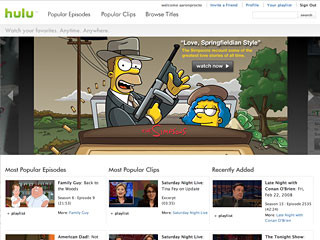 Love at first sight? Hulu, the industry’s response to the user’s demand for video, looks good even if you don’t show up again for seconds. There’s a surprisingly deep selection of old and new programming, void of anything “user generated.” The video is big — as film and television should be — and it’s way easier to search than the Google-owned YouTube.

Chances are you are yet to know this Hulu site. It’s been closed off as a “private beta” since October, not yet ready for the masses. If anyone wants to take a look, I have 5 invites up for grabs. 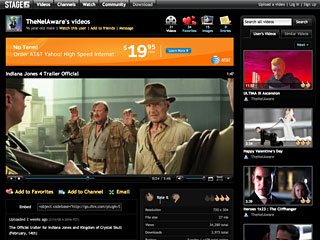 On the flip side, Stage6 just gave 72 hours notice: it’s closing up shop this Thursday. Maybe it was all of the pirated content and the competitiveness of streaming video, but the official word is cost — as much as $1 million a month. A project of DivX, makers of the high-definition codec for video (and competitor to Joost and Flash), the product blog noted that last year they were “explor(ing) strategic alternatives, which is a fancy way of saying we decided we would either have to sell it, spin it out into a private company or shut it down.” Today’s post on the product’s blog had over 4,000 comments from distressed Stagers, some saying they would pay up to keep their videos up.

(For more coverage on the Stage6 closure, see NewTeeVee, 3by9.com, The Business of Online Video, and Webware.)

Footnote: Hulu is a collaborative project of NBC Universal and News Corp. Earlier this month, NBC waved goodbye to the annual Upfronts, as part of a strategy to debut pilot shows online and let them fight it out all year round. No other studio joined with them. Real Pop has a post about this year-round season and a chart that shows why NBC’s on to something. We also posted last May about the upfronts and quality content succeeding online.

For more alternatives to YouTube, see our directory of social video networks.

[…] Fast Forward – FWD:labs wrote an interesting post today on Ups and Downs of Social VideoHere’s a quick excerpt” The video is big Ã¢â‚¬â€ as film and television should be Ã¢â‚¬â€ and it’s way easier to search than YouTube…. […]

As noted in a rosy review in Fortune yesterday, Hulu will debut for the general public later this March. Michael Arrington, editor of Techcrunch, had some more genuine criticism of the buzz: “let the users find you because their friends canÃ¢â‚¬â„¢t stop talking about how great the service is.”