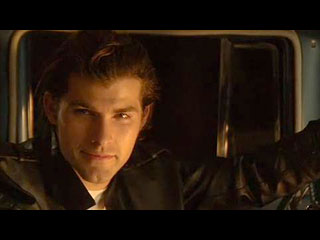 You just got picked for SHOOT’s New Directors Showcase, specifically with the spec commercial, Levi’s “True Love.” What are you most proud of and what do you want to do next?

Ezra J. Stanley I’m most proud the team of family and friends who helped me get to this place. This aligns with what I’ve wanted to developed: overcoming fears. It’s been sometimes hard. I’m proud of sticking with it. I can’t believe it.

Next I would like to do another spec, but I’d like a production company or agency to realize it. It’ll be bigger than the last two.

EJS As AboveGrey Pictures, I’ve been working with DP Alejandro Wilkins. We went to film school years ago. We developed a working relationship at school. I really enjoy directing. He really enjoys the camera. I barely touch camera. I need that relationship with my DP.

I look for people who are fun and get out there. Those are the people who end up on my set. They even want to work for free. That’s the collaboration I want. I have this passion and I want my actors to be just as engaged, high-achievers. I don’t settle for anyone with any half-ass working with me on set. That may become a problem, but all-or-nothing seems to work for me.

I’m very single minded. I’m never co-directing. I dream it and write it on my own. I pitch it to Alejandro or whomever wants to produce something. I think having a vision that is complete and whole, that’s where the word director comes in. I don’t even like that word. I prefer “lead collaborator.” That’s how I deal with the whole filmmaking system.

I hug everybody on set. We’re skipping, dancing. It’s my world and I really enjoy the world.

EJS They call it branded content. All along, I’ve been doing this to entertain. I was trained to be a classic filmmaker and now bringing that training to the commercial world. Long-form really entertains people, which is what I enjoy the most. When people are laughing from the beginning to end frames, that’s what I want. It’s important that the consciousness of the viewer is fully involved. I’m always developing that. I don’t think there are any rules. We rely on some rules about ads. But I want to be the guy to screw the rules, to play with them drastically.

Also, the spec work has helped for TV and film directing for hire.

You used the YouTube response video strategy with your earlier spot to gather up extra views. Can you tell me about that approach?

EJS That’s how you do it. We first look into other commercials. Then we link it to our own. “Post Mortem” was really popular, so we chained the commercials together. We link the videos together. You gotta do whatever you can do.

What has acting and computer science taught you about directing content?

EJS I started in high school with a lot of programming, late nights making video games. The same thing happens when I write. It’s a formula of structures, arrays, and sub-structures. When it’s done, it’s a perfect function. But my passion wasn’t computer science.

What real or imaginary technology in emerging media would you want to explore and why?

EJS 3D and stereoscopic design. Recent film festival I’ve been to have had a lot of 3D artists. I still want to do gallery installations with my work. I want to use the 3D world and make new appreciation, like at the MOMA.

ESPN is already in 3D. We have another few years before our technology is perfect. It’s not the best 3D. But I’m really interested in working with stereoscopic designers. I don’t like relying on cool mediums like 3D technology to make something cool. I like starting with story first. Going into the 3D world, my work has got to leave me to see the other dimension. Do we really need it? With “Avatar,” maybe yes. “Oh my gosh, this is cool.” Audiences saw an angle they weren’t used to.

I want to use it when the technology is right. I’m taking meetings with 3D designers.

Some of your regular influences for creative ideas?

EJS My dream world, I can remember all my dreams since birth. I remember my first nightmares. I have a very strong photographic memory. A lot of those flash to me in my waking life. I have like two other lives I’m living in my dream world. People, spiritual goals in my dream world. My waking life, I’m always contending with reality, like Dostoevsky. In middle school, I lucid dream every night. I had to develop pinch tests, really hard. My conscious mind would kick in, I’d sleep through alarms. Jumping off stairs, breaking my neck. I’m still in that place of playing with collective consciousness and the dreamworld nice.

And also my environment. I’m super sensitive to the energy of people, the sounds, and other dimensions of “reality.” A lot of this stuff plays out in my head, takes over me, like an eureka situation. Maybe it’s walking through a park at night or risky activities like motorcycling on highway 5 from San Francisco to Los Angeles, doing 100MPH with nothing else going on. Surfing also opens up a channel. Meditating. I’ll do a hell of a lot of meditation. Indian breathing exercises. Music, of course. At the end of it all, the way my head works, the music punctuates and gives me visions.

She should've hung onto them and flown into the air too, showing the STRENGTH of the stitch.