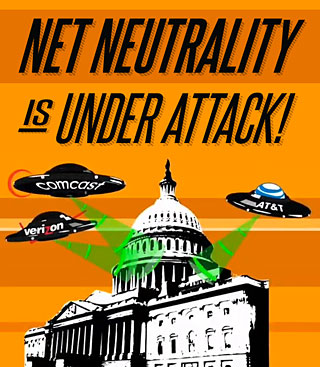 “Net Neutrality is Under Attack!” illustration by Free Press. Used under creative commons.

There’s protest — both in Washington and all over our newsfeeds this week — over the imposing possibility of favored treatment to companies that pay for a new “fast lane” on the Internet. In an ongoing back-and-forth at the Federal Communications Commission, there’s currently “proposed rules, drafted by Tom Wheeler, the chairman of the Federal Communications Commission, and his staff, [that] would allow Internet service providers to charge companies different rates for faster connection speeds,” says the The New York Times. Here are three efforts of defending so-called net neutrality, which affects filmmakers and audiences:

Update Re-published today on Thompson on Hollywood today, there’s another great piece by Chris Dorr called “Indie Film needs an Open Internet.” The author cites many film festivals backing the need, but asks an open-ended question: which organization will lead the effort?

Added a link to the great article by @chrisdorr to our piece on efforts to defend net neutrality: http://t.co/1QrG8K8GL3 #film #web #future

RT @fwdlabs: Added a link to the great article by @chrisdorr to our piece on efforts to defend net neutrality: http://t.co/1QrG8K8GL3 #filmâ€¦