The Times vs. Wikileaks and the Convergence of War and Gaming 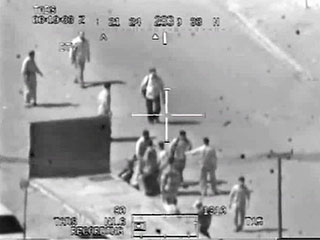 The New York Times just printed a gushing (one might even say jingoistic) report on how the military is using new technology to tap into Generation Yâ€™s social networking skills to nail insurgents and protect American troops, all from thousands of miles away. Read the Timesâ€™ account, and youâ€™d think this is mostly an exciting technology, which earnest, freckle-faced youths can use to scrub bad guys while they befriend their tougher colleagues on the ground, via chat rooms.

But as even that article acknowledges, the technology sometimes goes awry, like the time in February when Predator drones in Afghanistan snuffed out the lives of 23 innocent men, women and children â€” just one of many such incidents.

Well, hereâ€™s another perspective on what it means to turn the enemy (or those assumed to be) into pixelated blobs: Wikileaksâ€™ video of a U.S. helicopter annihilating as many as 12 people in 2007 on a Baghdad street, including two Reuters journalists.

Iâ€™m not embedding the video on this site because it makes me feel physically sick to watch it, and thereâ€™s really no commentary I can give that will add to its value. You will note, however, how much the clip looks like a short segment of Grand Theft Auto. Right down to the dialogue: After the first round of shooting is finished, a voice says, â€œOh, yeah, look at those dead bastardsâ€ and another begs a dying man to pick up a weapon, implying that heâ€™d then have a license to kill.

In some sense, this is just a raw dispatch from war. Iâ€™ve never been in a war, and I can only assume that its dialogue has been and always will be full of the most unpleasant things imaginable.

There is a particular coldness to this killing, though, and I think the technology has something to do with it. I hardly think we should celebrate it. The military says that rules of engagement were followed. If that is true, that is an indictment of the technology.

To see a sanitized version of the Wikileaks video, take a look at this BBC report on the detention of a US military analyst, possibly for leaking the tape.

Iâ€™m not a gamer, so I wasnâ€™t aware just how similar video games are to the video from Wikileaks. If you had the stomach to watch that clip (beware, itâ€™s extremely violent and disturbing), you will probably be shocked to see just how similar the game Call of Duty is to the actual experience:

My point here is not so much to slam video games, but to suggest there is something remarkable â€” and awful â€” about this convergence of technologies. Entertainment, since its earliest forms, has always used war as inspiration. But until now it has been impossible to have a simulated experience that is so nearly exactly like the real one.

And itâ€™s not that entertainment has chased war as much as some experiences of war â€” the remote ones â€” are becoming more like entertainment. Part of the appeal of entertainment that shows killing is that it removes all the nastier aspects of the experience â€” from the humanity of an enemy to the feeling of immediate vulnerability. Old west gunfights were probably nothing like those in High Plains Drifter. Saving Private Ryan might be uncomfortably real, but it certainly canâ€™t be a substitute for participating in D-Day. The similarity between coordinating drone strikes, though, and playing Call of Duty seems unprecedented.

Does this influence how we as a country decide which wars to wage? Itâ€™s hard to say for sure, but there are certainly some interesting parallels between our foreign policy and the experience the technology helps create: god-like feelings of omnipotence, invulnerability, superiority, cold detachment from othersâ€™ suffering.

It is awe-inspiring technology, but it is also dangerous â€” not just for journalists carrying video cameras around the streets of Baghdad, but, I think, for the people pulling the trigger (or pushing the buttons). Or maybe I just think that way because my parents read me Lord of the Rings when I was 10.

— Eamon Kircher-Allen
Eamon Kircher-Allen has reported from the Middle East, Africa and the United States for outlets including Global Post, The Christian Science Monitor, Mother Jones, Lebanon's Daily Star and the Pulitzer Center. He blogs about media, politics and international affairs at The Long Gone Daddy.

[…] The Times vs. Wikileaks and the Convergence of War and GamingGuest contributor Eamon Kircher-Allen discusses the first leak, where a video feed and a video game look all too familiar […]