The Void at the Center of the Anti-Islam Video Crisis 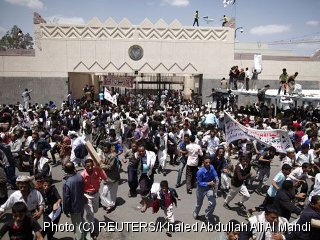 The irony of the uproar connected to the now infamous anti-Islam video is this: almost everyone who has involved themselves in it has voluntarily taken on a role as grotesque, poorly scripted, vacuous, and disconnected from reality as the absurd characters in the cheap YouTube clip that is nominally at the heart of the crisis.

The video itself is the kind of sordid but forgettable drivel that gunks up plenty of corners of the Internet, and would be utterly inconsequential in another context. Having forced myself to watch the clips â€” they are certainly hateful but also less than mediocre, far less â€” itâ€™s plain that the real story is not the video, but how it has been promoted by rabble-rousers like TV presenter Sheikh Khalad Abdalla (who has been called a sort of Egyptian Glenn Beck), and those like his dependable foil, Islam-hating Florida Pastor Terry Jones. John Hudson of The Atlantic Wire explains this well here, and also makes the excellent point that the mystery of the day â€” the identity of the real producer of the clip â€“ is a sideshow barely related to the uproar.

And yet the main question murmured around American water coolers today seems to be, â€Why are they so angry about a movie?â€ The answer has little to do with the clip itself, or with belief. What weâ€™re likely seeing is the savvy manipulation of public sentiment, under the guise of religious dignity, mostly for domestic political gain in the countries where there are demonstrations or worse. Itâ€™s too early to ponder the particular details of how this is happening â€” and commentators everywhere are venturing opinions at the risk of contradictory revelations in the next days and weeks â€” but in broad strokes, it is clear that these originated as political actions, not spontaneous faith-based responses.

There is lots of raw anger toward the U.S. in the Middle East still, despite what your tour guide at the Statue of Liberty told you about America being the inspiration for the Arab Spring. It may have something to do with, say, 10 years of a bloody war on terror that has fractured societies and occupied countries and â€¦ well, a lot of other things besides a 15-minute video with mind-bogglingly crappy production value. That anger is an amorphous commodity that is available for use at the hands of skillful populists.

Thus, the out-of-control flag-burner is one role that people have taken on in the crisis, and the amateur provocateurs who made the movie are undoubtedly thrilled and surprised at the impact of their handiwork. (They may or may not realize that they are essentially in league with their supposed nemeses â€” other extremists who would also like to move us all irrevocably toward a worldwide war on religious lines.)

But other responses have been equally one-dimensional. If youâ€™re an American, a perusal of your Facebook feed will show that at least a few of your acquaintances are freshly astonished with the â€œbarbarityâ€ of Islam. Others condemn the filmmakers as the real cause of the violence. Still others respond that, however bad the video is, whatâ€™s really on the line is our free speech. Shouting matches erupt; accusations are thrown; positions become more polarized.

While the movie is undoubtedly condemnation-worthy, and also protected in the United States by the First Amendment, all of this gives the producers(s) far too much credit. The abject inferiority of their project is apparent to anyone remotely familiar with contemporary media. This is how, one must guess, they wanted us to react.

Itâ€™s all a bit sad. People everywhere are retreating into caricatures of themselves and fulfilling each otherâ€™s worst stereotypes. In doing so, the protesters, their denouncers, their apologists, and most especially those who would cast this as a clash of religious values, have become poor players acting out a script written by idiots.

As such, weâ€™d all do well to take the whole conflagration with a bit of skepticism, and recognize the real political aims â€” both domestic and international â€” of those who are fanning the flames.

Because if everyone buys into this taleâ€™s sound and fury, things could get a lot uglier still.

— Eamon Kircher-Allen
Eamon Kircher-Allen has reported from the Middle East, Africa and the United States for outlets including Global Post, The Christian Science Monitor, Mother Jones, Lebanon's Daily Star and the Pulitzer Center. He blogs about media, politics and international affairs at The Long Gone Daddy.