The State of 360-Degree Cameras for Online Interactivity

For immersive and engaging cinematic experiences, there is 3D and then there is interactive 3D video. Much like a video game experience involving your keyboard or mouse, there’s a lot of innovation among the tools to connect filmmaking with interactive. 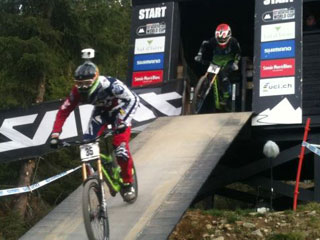 Behind the scenes look at the Red Bull shoot. Photo by MakingView.

Take the Red Bull Media House’s marketing for example. They continue to experiment with interactive online video content, now using Making Viewâ€™s ViewCam. It’s a mere 1.3 pounds. Just recently, the company attached it to an F1 race car driver (embedded below) and a mountain biker to demonstrate the equipment’s capabilities. From the commentary online already, fans love it. The creative experiments and joys of having $5.5 billion in revenue last year, right?

Another company, EyeSee360, sells a GoPano Plus ($699) and a GoPano Micro for the iPhone ($79). TIC360 recently shot the Matchbox 20 “She’s So Mean” music video using the Plus model with a JVC 4K camera. They also rolled on the Space Shuttle Endeavor’s trip through Los Angeles. The New York Times reviewed their launch in 2011. GoPano also has its own iPhone app since the player format is not standard.

On the engineering front, digital media entrepreneur Jeff Glasse at Koget raised over $120,000 on Kickstarter for a Dot, a 360 degree video capture for the iPhone 4 and 4S, which is now for sale.. Computer engineer Jonas Pfeil engineered a “Throwable Panoramic Ball Camera” in 2011, but it needs investors before shipping to market. The CAVE Laboratory at Columbia University also has been experimenting with 360-degree projects like a Cyclops and Zoomnicam camera.

Obviously, this kind of work leaves life to chance, cinematography on the sidelines, and editing in the dust. This foray into a different kind of 3D camera technology, however, combines an added level of creativity through the use of smaller cameras, while adding a level of audience engagement with its online distribution. However, the usage of these cameras, and the technology itself, hasnâ€™tt yet been perfected. Some issues include the lack of interoperability of a video player: each company has their own Flash player, which locks out iOS users.

Where else are 360 cameras going? There’s the not-so-hand’s-on Google Street View, which has an option to utilize WebGL, the technology engine that makes viewing outside of Flash possible as well as 3D graphics on top of video. Gone will be security cameras pointing in just one direction, too. The security logistics of one camera pointed everywhere at once has Doo Technologies in business.

What else is out there? How can 360-degree experiences provide more story?