The Identity Complex of 14 Emmy Nominations for Netflix 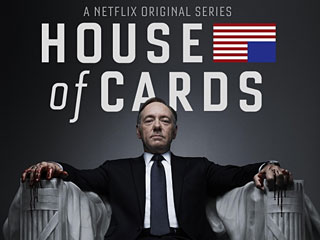 Do three programs, now with fourteen Emmy nominations, legitimize a network? Netflix must think so. “House of Cards,” one of several attempts at original content from the video platform, has now been nominated for nine Emmys, and rightly so, alongside three for their “Arrested Development” follow-up and two for exclusive “Hemlock Grove.”

But, over at New York Magazine, Netflix’s chief content officer, Ted Sarandos, describes his digital-reborn business as an epicenter of high-quality, which may seem shocking to some.

“Netflix has always been about high-quality entertainment, and [Emmy nominations] should be a reinforcement of that,” Sarandos says. “When [consumers] are sitting down to watch TV, we’re another channel to watch.”

Are we watching the same Netflix here? “High-quality entertainment” is not my impression of the online/offline platform-turned-original-programmer. Browsing Netflix, with or without loading up instantwatcher.com nor their now-retired “expiring soon” API data, is painful. It reminds me of a seedy video store, complete with flickering florescent bulbs as I slide ho-hum box covers left and right, looking for something really worthwhile. So much Netflix content is stagnant, buried, or even lost in giant clumps. I can sometimes spend ten minutes looking through titles, unimpressed by countless but uninspired and often low-quality options, still void of guessing my favorites despite throwing a million dollars (2006-2009) at the algorithm.

What happens after “House of Cards” is watched in a binge? Unlike the slower pace of network releases, for better or worse, the network’s few exclusive shows are on the right track, but hardly make the platform “all about high-quality entertainment.” Maybe Netflix can avoid its frustratingly cheap bulk of content by delegating less licensing costs to cheap content, and focus more on the encore lineup of additional, original programming for this “high-quality entertainment” that they’re apparently all about.

I wonder if in the future Netflix and Hulu will be like the NBC and CBS of TV and then there’s all these other TV apps like that, for other content, like HBO Go but also new ones that become like the cable networks.