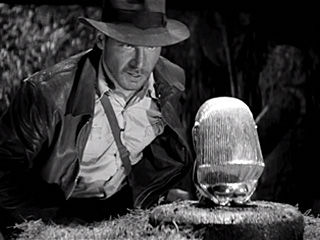 Steven Soderbergh showcased an experiment in cinematic staging yesterday on his website, Extension 765. For educational purposes, he notes, Soderbergh put online a full copy of Steven Spielberg’s “The Raiders of the Lost Ark” that he easily converted into black-and-white, and then also replaced the entire audio track with a wall-to-wall soundtrack.

Why would you want to watch “Raiders” in black-and-white with electronic music? Soderbergh’s point is regarding the visual staging via the cinematography and the edit, and how it affects how the film is consistent and iconic. Like a silent film or a foreign film without subtitles, Soderbergh believes “a movie should work with the sound off” and wants us to watch and “think only about staging, how the shots are built and laid out, what the rules of movement are, [and] what the cutting patterns are.”

The original 1981 film was shot in color by Douglas Slocombe, who before this picture lensed several black-and-white features. The replaced music is the soundtrack of David Fincher’s “The Social Network” by Trent Reznor and Atticus Ross, as well as “The Girl With the Dragon Tattoo” by the same director and musicians.

We would include the video here but the file’s embed settings appear to be limited to only Soderbergh’s website. View the feature film on the original article at Extension765.com.

(Thanks to Charlie Beckerman for the head’s up on this effort.)