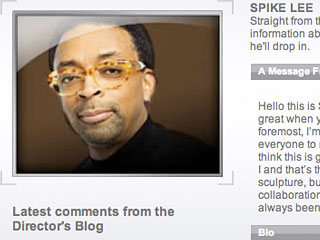 Oscar-nominated director Spike Lee, teaming with Nokia, is calling his experimental filmmaking endeavour the “democratization of film.” In a recent article in the New York Times, the filmmaker expresses his interest in mobile contest “because it’s a great collaborative effort. Within five years, new movies will be made with devices like these. … We want people to send sounds, music, maybe a baby crying in the park.” The director will oversee the top 25 submissions of video, music, photos and text sent in by cell phone users to create a feature-length film.

Film intentionally made, not just distributed, for mobile is gaining momentum as these devices have larger screens to see and easier accessibility to share. In 2004, Fox started, and trademarked, “mobisodes” with spin-off episodes of hit show, “24: Conspiracy,” which were comissioned by Verizon. In 2007, MTV Networks started the animated series “Lil’ Bush: Resident of the United States” and mtvU tried the live action “Suck Less, With Kevin Smith,” both partnered with Amp’d Mobile. Also in 2007, Robert Redford’s Sundance Institute and GSM worked to make the Global Short Film Project and its five short films for your phone. Director Maria Maggenti, whose film “Los Viajes de King Tiny” was included, shares her excitement on the new dialogue. “The thing that’s interesting about this format–about using this technology–is that there’s still a really strong impulse that people have to share. … The same way you do when you go to the cinema. I hope that people say: ‘Oh! Let me send you this little movie,’ or ‘Come over here and watch this movie that’s on my cell phone!’ That’s what I want people to get out of it: Sharing it.”

Cinematographic creativity might be on the rise, but online video is rife with incoherent randomness. It’s another capture medium and distribution platform for storytelling, but yet to gain the momentum behind webisodes and social video networks.

One of the new ways of thinking is the transparency of dialogue between audience and distributor. In the BusinessWeek article, “How Nokia Users Drive Innovation,”, suggests that “[i]nstead of people recording silly Web cam videos for YouTube or inventing frivolous advocacy groups on Facebook, [cell phone users] can help make the mobile Internet more useful.” These efforts need — and this one has — a roadmap with specific assignments. As noted in the press release for the Lee/Nokia contest, “each act will be announced online and people will then have four weeks to produce their submission.”

Lee goes further to suggests that “[a]spiring filmmakers no longer have to go to film school to make great work. With a simple mobile phone, almost anyone can now become a filmmaker.” Film critic Eric D. Snider disagrees in his opinion on Film.com. “Hold the phone there, Spikeroo. There’s a huge difference between ‘making a film’ — i.e., pointing your camera or cell phone at something and pressing ‘record’ — and being a ‘filmmaker.’ No, you don’t have to go to film school to be a filmmaker. But merely possessing a device that can record moving images doesn’t qualify you as one either. I’ve got some pots and pans in my kitchen. Does that mean I’m a chef? If so, it’s going on my resume.”

Director David Lynch also had some curt thoughts on being “cheated” with cinema that ends up on cells. Ironically, the soundbite from the Inland Empire DVD extra found its way onto YouTube and, in January 2008, the mash-up became an iPhone parody.

Proximity is a big change, as noted on SlashFilm.com. The scale of audience to screen to a movie theater screen, to a living room television, to a personal computer screen, and to a cell phone in your hand divide each step of the way. Wired Magazine, in a 2004 article on cell phone filmmaking, asked director Joe Miale on that relationship. “You’re not going to make a short film that is character-based. It would be more caricature-based. … A two-minute Pixar movie, with animated fish, would be perfect. I don’t think there’s enough on that tiny little screen to give you a breathtaking performance with subtlety.”

In a recent interview with AdAge, Spike Lee said of his hopes for this feature film, “I never underestimate creativity in people.”

Spike Lee, teaming with Nokia, is calling his experimental filmmaking endeavour the Ã¢â‚¬Å“democratization of film.Ã¢â‚¬? In a recent article in the New York Times, the filmmaker expresses his interest in mobile contest Ã¢â‚¬Â¦ Read the rest of this great posthere

David Lynch is great. I hope we never get to the level of viralization that films are viewed on phones, youtube, and other modes instead of actual film theaters. Never know, it could be comin’. Then again, they said the same thing about the TV.

Great post Aaron, I definitely think we’re in interesting times right now, where distribution and even creation mediums are wider and more accessible than ever before. It’s already at the point where “entertainment” and “film” are no longer so narrowly defined – there are Youtube videos out there created on $8 webcams that are way more entertaining then a lot of the shit that gets released in theaters…and these days they’re able to find just as big of audiences too without any of the middleman. I’m excited for the future of all this and I think if anything, it’ll be a future bursting with more creativity and less obstacles in the way.

Oh and your post also reminded me of a short I shot on a cell phone a few years ago: http://youtube.com/watch?v=PTi0Dm0kZqI

It’s definitely no masterpiece, but it was for a cell phone film competition and my friends and I had a blast making it haha

[…] out with a new iteration last Thursday, is the latest mobile platform for filmmakers. And no matter what David Lynch says about it, the latest geek chic is not just for calling people, browsing online, or watching movies: it can […]

[…] the subject of watching film on mobile devices is polemic, especially if you ask filmmakers like Spike Lee and David Lynch. Developing applications, especially for the iPhone, is an […]

I have to say that I disagree. I feel that people who shoot video on their phones are filmmakers but that doesn’t mean they are professional filmmakers; to me there is a difference. I think it is great that there are festivals or competitions starting for phone videos because it allows for anyone to try and become a filmmaker. Not everyone is able to afford a video camera but a lot of people are able to afford phones that have cameras. Plus I think some really good horror movies could be made through the use of camera phones. I mean just imagine movies like the Blair Witch Project or Cloverfield on cell phones. It would make it appear all the more real in my opinion.