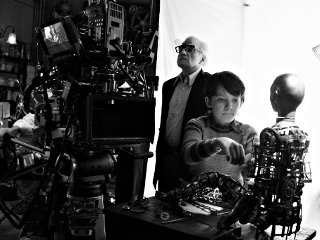 Behind the scenes of "Hugo." Photo from NYTimes.com.

“Quite honestly, I would [shoot all my movies on 3D.] I don’t think there’s a subject matter that can’t absorb 3D; that can’t tolerate the addition of depth as a storytelling technique. We view everyday life with depth. I think certain subject matters aren’t meant for 3D but you have to go back to Technicolor; when it was used in 1935 with Becky Sharp. For about 10-15 years, Technicolor was relegated to musicals, comedies and westerns. It wasn’t intended for the serious genres, but now everything is in color. And so it’s just a different mindset. Granted once the technology advances and you can eliminates glasses that are hindrances to some moviegoers, so why not? It’s just a natural progression.”

— Scorsese, who founded the Film Foundation and believes in its preservation, recently told Deadline.com he thinks 3-D is a natural progression for cinema.