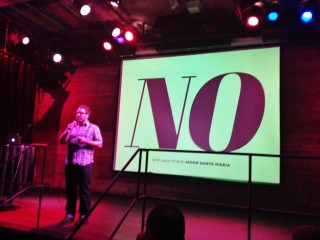 Part of a breakfast lecture series for creative types called CreativeMornings, a New York-based effort (now worldwide) from Tina Roth-Eisenberg (aka swissmiss), designer Jason Santa Maria spoke in October. His topic at their Kickstarter benefit in New York was about “saying no.”

As a design school graduate, I’ve always admired Jason’s work in website, identity, and letterprint design. His pixel-perfect work is most known for upgrading WordPress , AIGA, Dictionary.com and Typekit, along with several online portals for print publications like the Chicago Tribune and Chicago Now.

On the matter of choices between 20 and 40, Jason added more on his blog:

It might be saying no to a project or job, or even something that you think you canâ€™t say no to, but finding the strength to set your own priorities for what you want is one of the most crucial things you can do in life. Saying no used to make me uncomfortable, and despite making many mistakes on my way there, Iâ€™ve learned to feel good about saying it. The talk is just a short 20 minutes, but sums up most everything Iâ€™ve learned about the topic in all my years working and living.

Have you set your priorities for what you want out of a job? Do tell in the comments below.