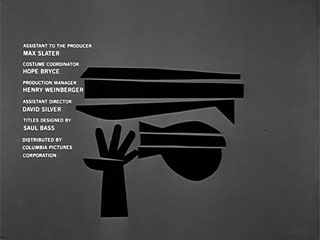 With Otto Preminger’s 1959 film Anatomy of a Murder, film critic Leo Goldsmith — a contributor to Reverse Shot and The Village Voice — describes part of the stark opening sequence: “Echoing the deliberate manner in which the film dissects the circumstances of a murder case, the credits also provide some witty juxtapositions of titles and images: James Stewart naturally gets the head; Lee Remmick a leg; Duke an arm; and Preminger’s credit comes once a disembodied hand seems to cover the lens.” Goldsmith elaborates on an inspiring tribute site for Saul Bass at NotComing.com, featuring stills and overviews of his title design collaborations.

Bass, who passed away in 1996, was featured Bass as a design pioneer in Communication Arts magazine, who spoke with director Martin Scorsese about his designs. “Bass fashioned title sequences into an art, creating in some cases, like Vertigo, a mini-film within a film. His graphic compositions in movement function as a prologue to the movie–setting the tone, providing the mood and foreshadowing the action.” Bass did the opening titles for Scorsese’s Goodfellas, Cape Fear and Casino.

YouTube, as you can expect, has most of the opening sequences, amalgamated recently at BlogDeCine.com.

A short biography, stills and graphic identities are on DesignMuseum.org; a Bass retrospective took place at the London museum last year.

There are also many related links and books on TheDesignEncyclopedia.org.

A retrospective on Bass just ended at the Skirball Cultural Center in Los Angeles. Some images are on Flickr.

Upcoming April 11, in the world of opening film titles, Kyle Cooper (Se7en, Dawn of the Dead, Spider-Man series) will be speaking on the art of title design at an AIGA Atlanta event. Cooper and Bass are often compared, but take the introductions in very different directions, as elaborated in Jon M. Gibson’s article for Wired Magazine. He was interviewed last week by Curt Holman at CreativeLoafing.com.

[IMG]Anatomy of a Saul Bass title design/ April 8, 2007 With Otto PremingerÃ¢â‚¬â„¢s 1959 film Anatomy of a Murder, film critic Leo Goldsmith Ã¢â‚¬â€ a contributor to Reverse Shot and The Village Voice Ã¢â‚¬â€ describes part of the stark opening sequence: Ã¢â‚¬Å“Echoing the deliberate manner in which the