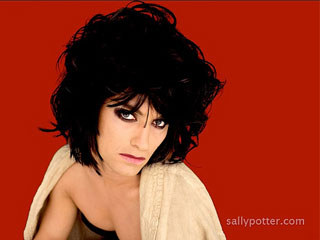 Jude Law as celebrity model, Minx, in the film 'Rage.'

Accomplished writer/director Sally Potter on giving away her new film, “Rage” (via Babelgum.com plus DVD sales and NetFlix), while trying to confront piracy head-on:

The decision to ‘give away’ the film for free on peopleâ€™s mobile phones and on the internet was, we hoped, (in addition to being refreshingly forward thinking and in the spirit of the story), also a way of being one step ahead of the pirates. Instead of needing to steal it by illegally downloading it, people could experience it – above board – as a gift from the filmmakers. Those who could not afford to buy a cinema ticket or DVD would not miss out on the experience if they wanted to have it.

And just as food for the body costs money to grow and distribute, so do films. A DVD can cost much less than a night out in the pub, another new Tshirt, or many of the other so-called essentials that people do not think twice about laying out their hard-earned cash for.

A movie premiere on your phone? I swear, I think a lot of this modern technology today is a fad, especially in film and television.

And the movie was split in 7 episodes, 1 episode per day released on mobile and since Sept 28th, the episodes are being released every Mondays and Thursdays on Babelgum.com with the availability to embed them onto your site or blog.