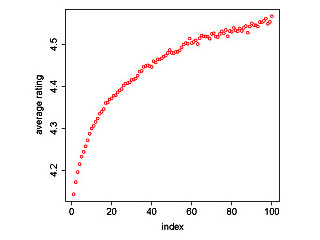 According to new research highlighted in the MIT Technology Review, as a result of the quantity of user-generated content, the odds of making the top percentile any given day is a game of collective attention, independent of quality or quantity.

HP Laboratories researchers Fang Wu and Bernardo A. Huberman finished a study called Persistence and Success in the Attention Economy (PDF). The abstract describes that,

“[A]n analysis of the production histories and success dynamics of 10 million videos from YouTube revealed that the more frequently an individual uploads content the less likely it is that it will reach a success threshold. This paradoxical result is further compounded by the fact that the average quality of submissions does increase with the number of uploads, with the likelihood of success less than that of playing a lottery.”

In today’s “attention economy” as a content-producing filmmaker interested in audience and profit numbers (but often not responsible for marketing any of it), I think success can be defined in two new ways:

I also think I’m motivated to game the crowd by doing one or both of the following: