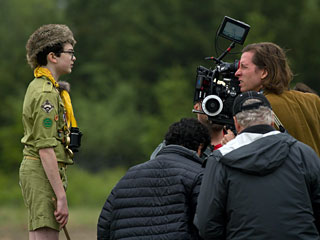 Andrew Weisblum, ACE, editor of Wes Anderson’s “Moonrise Kingdom,” was recently asked by Bryant Frazer at StudioDaily about some unique approaches to the workflow. In addition to shooting 16mm, handling a short schedule, downloading dailies nightly, and cutting on set with his laptop, Weisblum had this note about cutting lines together:

One trick that helped make the most out of the kids’ performances was having them record their dialogue multiple times, both on set and also in a separate studio. A lot of those line readings ended up being intermixed with the production recordings, giving Weisblum and Anderson added flexibility to shape the performances in the cutting room. In fact, that kind of detail work has become increasingly commonplace over the three films Weisblum has cut for Anderson. “There isn’t a scene where you don’t end up substituting dialogue and/or words of every line from other takes and other performances,” he says. “If we had a scene that played out in a master shot with whip pans designed as cut points, he might do 20 takes of that and we would stack all the dialogue together, pick the best readings, and sync those with the one take we’re using. One sentence of Mr. Fox could be from 12 different takes, and that’s the kind of construction we started doing on Moonrise â€” not because the performances needed so much work, but because it was possible to make them that much more special.”

Weisblum’s meticulous work is yet another way to save time in a production where the collaborative vision for the film allows for shortcuts and the final product becomes all the more distinct.