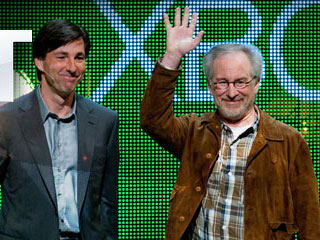 In an industry of smoke and mirrors, not everyday is there a gaming ad that works as advertised.

Just recently, LucasArts showed off a cinematic trailer for “Star Wars: The Old Republic,” yet game-play graphics are far from what wows viewers.

Now half-way through the three-day E3 Expo, Microsoft’s Project Natal has been the talk of the industry since Monday’s announcement. The controller-free device, which uses two cameras and a microphone, extends their XBOX 360 line. Take a look at the ad:

Also see Wired for a promotional video and Monday’s introduction, which included Steven Spielberg. And check out the BBC interview with Spielberg on his involvement with gaming.

(via The Daily Dish)

This is everything we’ve always dreamed about with technology. From our first time watching Metropolis all the way to Minority Report and A.I. We’ve always known this would happen and we are living in a time when the one time, unimaginable, is now. I see some taboo games coming out of this…

This thing is going to have like ten thousand bugs. Just watch. I mean, if it didn’t, it wouldn’t be Microsoft, would it?

Hopefully the response time isn’t as slow as I imagine it’d be.

I think this has potential to be amazing, but at the same time…

who the hell has a living room that size?!

and Microsoft needs to invest in better actors. haha.