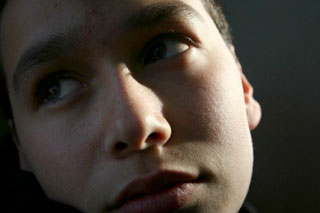 Max Sokoloff is a 14-year old director in San Francisco. His film, “Voyage of the Mind,” was recently awarded an honorable mention in the 2007 Northern California Television Academy Awards. I was re-introduced to Max on a trip to San Francisco in December 2006, at Ronald Chase’s Art & Film for Teenagers — a group that meets on Fridays and Saturdays and is open for anyone to attend, with a separate filmmaker’s workshop, of which I’m an alum. Astute, intellectual and serious, Max is a young award-winning filmmaker, studying and practicing with art films while in the midst of high school.

What are you most proud of and what do you want to do next?

Max Sokoloff I’m most proud of a film I made [in 2006] called “Intermissions.” Mainly, just because it is the most ambitious project I’ve worked on. It was filmed all in one day (9 hours) and surprisingly turned out really well considering the circumstances. This year I’ve been working on so many different projects. Slowly, some of them seem to be coming together and some seem to be falling apart. I just finished a dance film inspired by Wong Kar Wai.

MS Watching the films of Wong-Kar-Wai have taught me so much about movement and how the camera can be used effectively. He is an expert when it comes to movement as emotion and his films have this visual poetry, which very few filmmakers can measure up to.

What real or imaginary technology in emerging media (mobile, web) would you want to explore and why?

MS I never have really thought about imaginary technology. Right now, I am still just trying to learn the basics and learn how to make a good film.

MS I think one of the important qualities of being a director is being able to work with a variety of people under a variety of circumstances. I try and work with as many people as possible and I end up working in such different ways.

I have been working a lot lately with Oren Ratowsky on scripts and productions. He does fabulous camera work. And I always check my scripts by Isaiah Dufort because he is an outstanding writer (especially gifted when it comes to dialogue).

MS I have been reading some short stories by Isak Dinesen, which have been really inspiring. She has wonderful imagery in her writing and it seems perfect for film. Yesterday, I just re-watched a film by the Dardenne brothers called L’enfant.

I wasn’t sure at first, if film was what I wanted to pursue, but after seeing [Frederico] Fellini’s 8 1Ã¢?â€ž2 I was convinced. The imagery, symbolism, and metaphor, and the truthful qualities of the story are spectacular. The ending scene is burned into my brain, and I believe it is one of the most amazing scenes in film. All these people from Guido’s life come and start dancing with their hands held together on a circus ring, as if to say, “Life is like a circus.” In this way, the scene is a metaphor for his life, and his life becomes his film. He joins in this circle and dances with his life and dances in his work, and he is a part of his art and his art is inseparable from who he is. I feel exactly the same as Guido and Fellini. My art is apart of me and who I am.

One other big influence: [Krzysztof] Kieslowski. Kieslowski is god.

Amazing for a 14 year old. Also, quite the list of influences — well-educated in film for a 14 year old. I’d recommend checking out some of the great (and more obscure) American film noirs and then New German Cinema: Herzog & Fasbinder. Those are Gods.

Ooh Max, finally we’re getting the press attention we deserve!