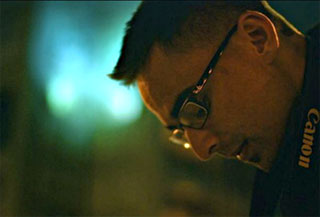 Music video director Mickey Finnegan has been wiggling and shuffling through the last 7 videos for LMFAO. His latest work, “Sexy And I Know It,” premiered two weeks ago and has almost 20,000,000 views on YouTube/VEVO.

What’s your creative process? Any stories of how you came up with treatments? Any elements of the videos evolve from idea to edit?

Mickey Finnegan Most of the inspiration for the LMFAO videos come from listening to the music and brainstorming with the fellas. The guys in the group are real creative and have lots of good ideas themselves. They might give me a couple goals they want the video to have. 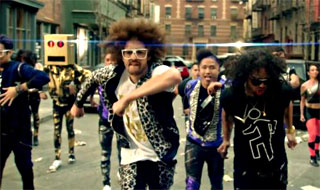 "Party Rock Anthem" has 229 million views on YouTube/VEVO within seven months; watch the embed below

For instance, with Party Rock, Foo told me that he “just want to showcase this dance called shuffling and everyone in the video needs to be doing it.” From there I created the zombie play. Then for the “sexy and I know” it video he talked about wanting to be strutting around in speedo’s. So I pitched him a “zoolander-esque” model off between the two guys. Then we have a dialogue and reform the ideas from there. 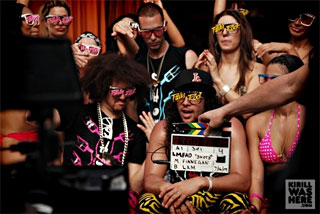 How have things changed since doing your first LMFAO video? What have you learned about the music or video business?

MF I think the main thing that has changed is the guys’ themselves being more aware of the process. Knowing what is possible to pull off and what is not.

The main thing I have learned in this industry is that there are so many people involved in the process and everyone has different goals with what they want. It’s not always about creating what you think is the best video, sometimes its about creating the video that is best for everyone, appeasing the interest of the label, the artist, the managers, the A&R team, the agencies who product place, etc. 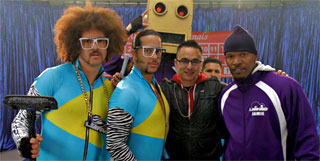 LMFAO, Mickey Finnegan, and guest Jamie Foxx for the "Yes" video, which runs over ten minutes in running time

There are a lot of things you can’t control. How do you execute your concept if your artist is 6 hours late? Or a random celebrity shows up and NEEDS to be in the video and can only stay for 10 minutes, how do you work them in? Or you have to product place Beats headphones even though the video takes place in the 1400’s etc. The business is full of hurdles that you have to roll with as they come. And you are a hero if you can at the end of the day walk away with a good product that appeases all these interests. 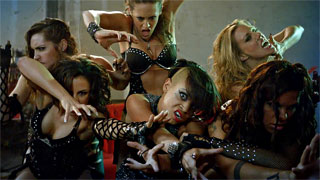 What inspires you most with directing music videos? Who or what are some of your biggest influences?

I think people tend to think of music videos as a very “creative artform.” Which it is, but the true genius in my opinion are the videos that are effective from a marketing and branding standpoint. As much as I like the Michel Gondry/Spike Jonze style videos that are visually quirky or original. I’m often much more impressed by the guy who does the generic “rap” video or generic “pop” video but gives it a unique twist or storyline or something to differentiate. That’s true genius, giving the artist the video that deep down they want, but putting a small creative spin on it. I think the guys I mentioned above are masters at that.

"Sexy And I Know It" brings "wiggle" new meaning and, with over 19 million views, Mickey tweets, "do music video directors get residuals yet?"

How has play on YouTube been a different experience than MTV? Where do you think the music video industry is headed?

MF I think everything is headed to the web — be it music video, tv, film, etc. The line between professional and consumer continues to shrink and I think that’s a good thing. Music videos being on youtube is great because it gives every artist the same opportunity/platform to exhibit themselves on. It also allows filmmakers and music video directors to showcase their work which in turn forces people to be more innovative, creative or cutting edge.