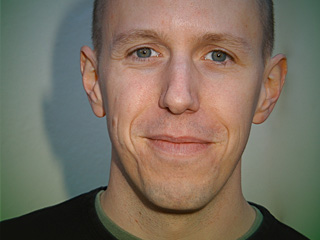 Screenwriter John August wasn’t content with the tools of his trade, so he teamed up to make his own company — Quote-Unquote Apps — to deliver better results. Despite a handful of apps for screenwriters already on the market, they made Highland, Weekend Read and several others. Here’s our interview with John and his lead developer Nima Yousefi on their work, their challenges, and their ideas for the future.

John, you’re a successful screenwriter, so what led to making apps on the side with forming Quote-Unquote Apps?

John August Most of the apps we make are things I needed. Or at least wanted. For example, I’m constantly looking up credits on IMDb, but the site kept getting more and more overloaded with ads and cruft, so we made the browser extension Less IMDb.

I wanted to be able to take a screenplay PDF and melt it back down into a editable file. So we made Highland. Along the way, it became a great general-purpose screenwriting app.

I needed to watermark fifty scripts for Big Fish, so we made Bronson Watermarker. I wanted to read scripts on my iPhone without going blind, so we made Weekend Read. It’s all about fixing the things that bug me.

Apps John Wants isn’t the most profitable niche in the App Store, but these apps genuinely help me with my screenwriting work, so they’d almost be worth it even if we never sold them to strangers.

How did you team up with developers and designers to create apps like Highland and Weekend Read? What’s your involvement with the actual apps — creative director or coder?

John August Nima Yousefi had volunteered with an early web-based project called Scrippets, which ultimately grew into the open-source screenwriting format called Fountain (developed in partnership with Stu Maschwitz, who went on to make Slugline).

Nima agreed to do the coding work on Highland, then eventually joined us full-time in Los Angeles.

I’d hired Ryan Nelson to do web stuff, but he clearly had skills for everything visual. Between Ryan and Nima, there was a lot of app talent.

As in film, I’m a writer and director for our apps. I describe what I want, then we all collaborate to figure out how to achieve it. I’m not a coder, but I’m good at whiteboard logic. I’m not a designer, but I know what I want it to feel like. The challenge of the job is giving direction without stifling inspiration. I steer the ship, but I don’t run the engines.

You’ve been doing the Scriptnotes podcast for a while now. How has that built a digital-first following for you that pairs well with digital apps for desktop and mobile?

John August Scriptnotes is sort of its own beast. I never expected it would get as popular as it has. But it’s interesting that so many app developers are also podcasters; I love guesting on their shows.

As someone who makes apps for screenwriters, it’s obviously helpful to have a platform like Scriptnotes for talking about what we make. But I’m careful to never let it feel like an ad. I want screenwriters to find the tools that work best for them. 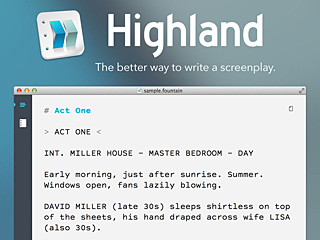 Highland is your flagship app. How do you feel it’s evolved since coming out in 2013? Knowing what you know now about making the app for screenwriters, rivaling staples like Final Draft, what would you have done differently — if anything?

John August Highland was never meant to be a full-fledged screenwriting app. We saw it mostly as a conversion utility. In fact, we added the editor pretty late in the process. But over the months, I found myself doing more and more of my daily writing directly in Highland. Its minimalism really helps me focus on the words, not the formatting.

With hindsight, I would have been more ambitious about allowing Highland to be a “real” screenwriting app right out of the gate. Many people still think of Highland as that thing that melts PDFs, when in fact it’s for daily writing. You can talk about apps and websites pivoting, but once you’ve established yourself as one thing, it’s hard to change people’s perceptions.

Another thing we were late on was robust customer support. We now use a combination of Reamaze and Slack that lets us be very nimble, and takes a lot of the burden off Nima.

How do you see the future of screenwriting apps, either with Quote-Unquote or the industry at large? What hurdles do you hope to overcome?

John August I think the first wave of screenwriting apps — by which I mean Final Draft and Screenwriter, mostly — focused on getting the formatting to work when printed on the page. For the most part, they succeeded. But they did it by forcing writers to work in unnatural ways, by declaring what type of element (dialogue, action, transition) a piece of text was before it was even written. It’s like trying to typeset a book while you’re writing it.

Fountain apps like Highland focus on the words instead, and for most screenwriters I think it’s a much better experience. But we can go further. The same processing power that makes it possible to interpret text for formatting should be able to interpret text for meaning, and give us new ways to look at our scripts. (Charles Forman has been doing some experiments along these lines.)

I believe we’re also near a tipping point where we’ll stop using simulated paper pages for everything. PDFs are terrific, but they’re frozen in amber. Keeping text as text allows collaboration, editing and version control that helps both writing and production. 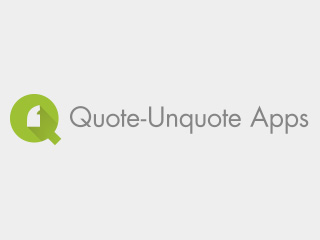 Nima, youâ€™re the lead coder at Quote-Unquote. How did you first begin to work with John?

Nima Yousefi Around 2008, John put out a call on his blog for someone to help put together a WordPress plugin to convert short, plain text screenplay bits into nicely formatted HTML. I was a long time reader of Johnâ€™s blog, and this was actually something I had thought of before, so it wasnâ€™t very difficult for me to come up with a working solution. We released it together as Scrippets, and continued to work together on growing, maintaining, and supporting the project. 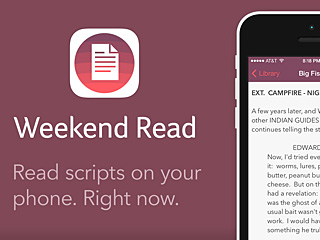 Your apps are all Mac, mobile and desktop. How has that been helpful for getting first to market and evolving? How has Swift changed up the roadmap for future efforts?

Nima Yousefi Itâ€™s been extremely helpful. By focusing on Apple technologies weâ€™re able to continuously build on our previous work, both in terms of reusing existing code (as is the case with our Mac app Highland, and iOS app Weekend Read), but also in terms of being able to build on experience with Appleâ€™s frameworks. This means each new app can get off the ground and iterate faster than the previous, even if all the code in it is new.

Swift hasnâ€™t really changed our roadmap. Although Swift is immensely exciting, weâ€™re going to hold off on making the jump to building apps in Swift until the dust from its 1.0 release settles down.

How do you best collaborate on these apps with Ryan Nelson and John?

Nima Yousefi Collaboration with them has been great. The most important thing for any team effort is for everyone to want to get to the same place, and thatâ€™s true of the three of us: we all want beautiful, usable software that makes it easier for people to get work done.

How do you see the future of screenwriting apps, either with Quote-Unquote or the industry at large? What hurdles do you have to overcome?

This is a nut thatâ€™s going to get cracked, eventually, and when it does weâ€™ll see a tremendous leap in what screenwriting apps can do, and more variation in how theyâ€™ll do it.