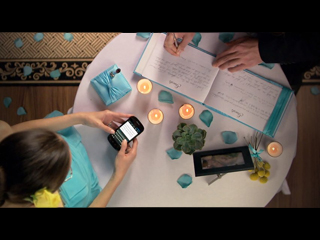 David Kruschke works at Studio G, Googleâ€™s in house video production team, as a director, producer, and editor. FWD:labs spoke with him about the new spot, “Best Best Man – Google Docs for Android.”

What were your decisions behind the “best man” storyline?

David Kruschke We thought a wedding would be a fun and interesting reason for people to collaborate. Itâ€™s also something people could easily relate to. We tried to emphasize the fun side of it with our production design and character quips.

And, the camera angles that anonymize the user while demonstrating gestures and features?

DK I wasnâ€™t specifically seeking to anonymize the user. If you watch closely, all the characters actually have personalities that come across by the type of edits and changes they make to the best manâ€™s speech.

The camera angle came about because I wanted the look and feel of a wedding but didnâ€™t want to use green screen or go on location. By shooting top down, we were able to convey the essence of a wedding by building what I call â€œmicro setsâ€. These sets look realistic from a birdâ€™s eye perspective (top down), but if the camera was angled any other way, you would see the studio and the lighting gear.

What would you say are the key elements to keep in mind when directing a product video and what do you have to avoid?

DK You need to remember the main message you want the audience to take away from the video and have a strong vision about how youâ€™re going to achieve that. Itâ€™s a short amount of time and you do not want to distract from the message.

How much time did it take to shoot the video vs. time spent in post-production?

DK Thanks to the great team of people we worked with, the video only took two days to shoot.

Since I was also the editor for this project, I stayed late on day one and assembled the footage. On day two, I spent my lunch and breaks cutting in the selects. By the end of the shoot, I had a pretty good rough cut to show. Two weeks after that, the Official Google Blog post featuring this video went live.

How have product videos impacted the nature of advertising over the last few years? What’s changed? Thoughts on the future of product videos?

DK Product videos have become a popular advertising method because the entire message can be delivered in a few minutes (or even less) and people have fun watching. At least the good ones, that is. When a product video goes viral, the viewers win and the company wins.

Having a clear script is becoming more important than having the highest production value. In other words, itâ€™s more about whatâ€™s being communicated than how gorgeous and smooth the shots are.

I think in the future weâ€™ll see companies placing more and more focus on education to draw in more users.

Moving forward, what type of product videos would you like to do next, and still in the director’s chair?

DK Iâ€™d like to keep doing what I am doing: communicating the value of Google products to the users.