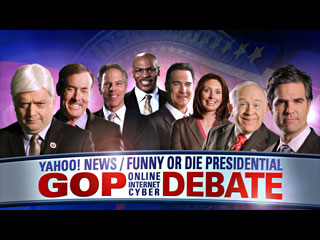 How was it to edit the “GOP Presidential Online Internet Cyber Debate” for Funny Or Die / Yahoo News? What was unique about this collaboration?

Hank Friedmann Usually they work with their own kind, but most of their editors had fled for the holidays. They heard about me through the grapevine and called me in. Thank goodness I don’t celebrate the solstice! They said it was one of their biggest projects ever, and it had a huge time crunch, but I did not give a crap. I chose to be one of many talented people that the producers pulled together at perhaps the most difficult time of year. I was very willing to spend sleepless, dreamless nights working on it because this is the kind of job I dream about anyways. I helped make a lot of sketches in college (Fireside Chats) and always thought I’d work in some form of comedy. Yet somehow I got into directing music videos and editing tons of music videos and commercials. I love doing that stuff, but it felt reeeeeeeaaal good to be doing this.

What were some of your influences or approaches for the cut, especially with so many funny moments, especially Mike Tyson’s Herman Cain?

HF It had to feel tight and broadcast-quality in order for the jokes to succeed. We kept it pretty sterilized with title-safe fonts and shiny graphics so that the jokes could shine through. It grated my soul to cut out so many jokes – and there were a lot of jokes left on the digital cutting room floor-o-sphere. But we had to keep the pace up, and so we’d often viciously cut to the root of the jokes. With Cain, we looked at some FOX news promos for tone. There were lots of good written jokes, but a good amount of funny came from the magical mind of Mr. Tyson, so we found ways to squeeze his jokes in. Although the script was solid from the get-go, we were always open to additional jokes and flourishes from the performers.

What’s your favorite part of the cut? Anything left on the cutting room floor that you wish stayed in the piece?

HF My absolute favorite thing was Larry King flapping his arms in an attempt to get Cain to leave (seen in a wide shot). Close second is Cain opening his mouth to talk at any moment. In third place is Perry’s racist joke, because I’m surprised Yahoo! would let it fly. The most tragic omission was an alternate ending to Obama’s rebuttal. After he introduces his book, a pair of 8-bit sunglasses come down and the words “deal with it” flash on screen. It’s from some internet meme that I had never seen, but it works well even if you’ve never seen the meme. We were pretty crushed when Yahoo! asked for a more generally approachable ending. The new ending’s pretty hot too, but soon you’ll be able to see the original on my reel – hankf.com.

How was your latest collaboration with Scott Yacyshyn? How long have you two worked together?

HF Scottsworth and I met at UCLA and have made tons of sketches (Fireside Chats, which is now Olde Money Boyz) and animations and shorts together. All the Funny or Die graphics people had fled for the holidays, so I suggested Scottsamillion. He did art and design on videos for the Onion out in NY, so he was a shoe-in. I should say that, when they came back from vacation, the Funny or Die director/editor guys did a bunch of the graphics and effects, like Herman Cain’s flying machine. But Scott was responsible for most of the graphics. He’s also a good writer and director and performer! Don’t you DARE think for a SECOND that he wants to work for MSCNNBC or anything.

Any special workflow in your edit for this timely content? How much time did you have between receive it to a final cut?

HF Footage trickled in over a week, and I synced, prepped, and cut assemblies from that. Once it was in a good place, I distributed portions to the returning Funny or Die director/editors, and we spent about 48 hours polishing all the bits and adding graphics. I guess things ran through my fingers at the end, but it was really a collaborative effort. Super collaborative. So collaborative it hurts. But it hurts so good.