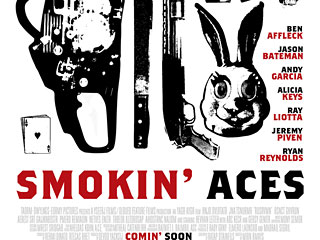 Director Joe Carnahan, behind this year’s Smokin’ Aces and the break-through Narc, has used his blog for posting killed movie poster concepts, some of which he really enjoyed:

Posterwire’s recent post, picked up this week on Signal vs. Noise, appreciated Carnahan’s online features. “ItÃ¢â‚¬â„¢s a rare opportunity to see all the unproduced movie posters that never make it to your local movie theatre lobby. As most film advertising art directors and designers will tell you, sometimes their best poster design work never sees the light of day beyond their own portfolios.” Carnahan also admirably opened it up to his fans with a poster contest in January.

Inversely, some concept work can be (accidentally) posted en masse around town, rather than just online. Last week, posters for the upcoming movie Captivity, starring Elisha Cuthbert (24, The Girl Next Door), show her depicted as being tortured and killed. The posters went up on 1,400 New York taxicabs and 30 Los Angeles billboards; due to much complaint, they came down this Monday.

In the story covered by Reuters, according to the distribution partner After Dark Films’s CEO, Courtney Solomon, the ads were accidentally sent to the printer who accidentally sent them to the billboard company without approvals. In a response on MotherJones.com, the process for print jobs is summed up best: “Anyone who’s ever worked at even the lowliest ad agency, production house, or print shop knows there is no possible way anything ever gets done without about 10,000 proofs, endless back-and-forths, and everyone from the board to the receptionist signing off. Whether they knew the campaign would immediately be taken down, or were just completely clueless, it’s hard to fathom how it could have actually been a mistake.”

The other distribution partner, Lions Gate Entertainment, was not involved in the marketing, but was due to see other concepts for promotion. For films seeking an MPAA rating, ads normally have to be approved by the MPAA’s advertising administration as a signatory.

For more from designer Art Machine Digital, see the gallery also at IMPAwards, including the poster for Saw II that got Lion’s Gate in trouble with the MPAA last year.

For more “unseen” movie posters, like one for JFK where “art director Alex Swart’s comp/concept with a shadow of Oswald and his rifle across Jim Garrison/Costner’s forehead was ultimately rejected by producer-director Oliver Stone because the design made it look too much like a generic Kevin Costner movie,” read the articles at TVparty.

Maybe they knew people saw 24 and The Girl Next Door and would not only not mind the torture of Elisha Cuthbert but enjoy it? I’d sign off.

[…] to people like director Joe Carnahan (Narc, Smokin' Aces). Last year, I wrote about how he kills his conceptual posters. He noted, "As most film advertising art directors and designers will tell you, sometimes […]