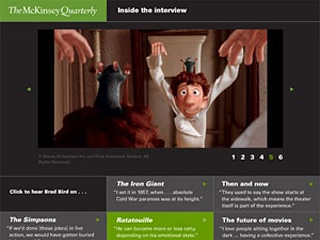 Kaizen, Japanese for the philosophy of continuous improvement, is one method to stir up innovation and playfulness, which is especially useful in the business of creativity.

The three principals, according to the Wikipedia entry, include:

In a New Yorker article now on newsstands, “The Open Secret of Success,” car maker Toyota is singled out as most profitable and innovative and now the industry’s sales leader. Part of that is due to the core approach of kaizen, which Toyota began after the Second World War. As a continually successful car company, it’s in part due to “defining innovation as an incremental process, in which the goal is not to make huge, sudden leaps but, rather, to make things better on a daily basis. Instead of trying to throw long touchdown passes, as it were, Toyota moves down the field by means of short and steady gains. And so it rejects the idea that innovation is the province of an elect few; instead, it’s taken to be an everyday task for which everyone is responsible.” The article highlights how philosophy of kaizen contrasts with how most companies think about change.

In a May 4 post by Cameron Schaeffer, “How to Kill an Organization: 5 Barriers to Kaizen,” the life lesson blogger opens with a quote from the 2003 book, “The Toyota Way,” by Jeffrey Liker. “The greatest sign of strength is when an individual can openly address thing that did not go right, take responsibility, and propose countermeasures to prevent these things from happening again. … [Kaizen] pushes the decision making (or proposal making) down to the workers and requires open discussion and a group consensus before implementing any decisions.” Schaefer elaborates on the five thoughts — including insecure leadership, unmotivated employees, and promotion by numbers — and suggests that companies who keep ahead “must reward the mavericks, the innovative thinkers who question the norm and create new ways of doing things.”

In a May 4 article in the New York Times, “Can You Become a Creature of New Habits?”, M. J. Ryan, author of the 2006 book “This Year I Will…,” notes three zones for change: comfort, stretch and stress. When we try something awkward and unfamiliar, or stretch, change can happen:

“Whenever we initiate change, even a positive one, we activate fear in our emotional brain. … If the fear is big enough, the fight-or-flight response will go off and we’ll run from what we’re trying to do. The small steps in kaizen don’t set off fight or flight, but rather keep us in the thinking brain, where we have access to our creativity and playfulness.”

On May 9, blog Signal vs. Noise recapped the Times article and others in a post called “The small steps edition.” They also cited the McKinsey Quarterly interview from April with director Brad Bird (The Incredibles, Ratatouille) called “Innovation lessons from Pixar.” (Free registration required at mckinseyquarterly.com to read entire article.)

When The Quarterly asked of important elements to stimulate innovative thinking, Bird touches on having the faith to follow through:

“The first step in achieving the impossible is believing that the impossible can be achieved. … ‘You don’t play it safe–you do something that scares you, that’s at the edge of your capabilities, where you might fail. That’s what gets you up in the morning.'”