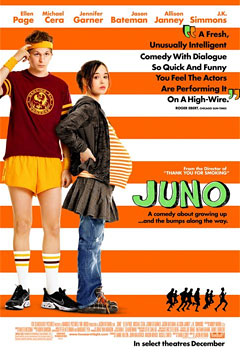 Overheard tonight after a packed screening of Juno, the little film that’s generating a lot of Oscar buzz for being a diamond in the rough, a throw-back to unpredictable and smart storytelling. Diablo Cody, ex-stripper and blogger from the Midwest, penned Juno, her first spec screenplay.

“The movie has all the hallmarks of an art-house film — endlessly quirky dialogue with a soundtrack to match — but contains an old-fashioned moral center. At a time when many films about teenagers are a mess of machinations and hookups, Juno ends in a very tender hug.”

Variety, back on November 1, explores Cody’s need to blog:

“It’s self-publishing. You don’t have to worry about some donkey in New York sending a letter: ‘This doesn’t serve our needs at this time.’ Instead you start getting fans, validation and the next thing you know, you have a book deal. I never received a rejection letter, never submitted anything in my life.”

Cody’s blog got noticed by a talent manager, who eventually got it to Jason Reitman (Thank You for Smoking), who directed Juno.

Los Angeles Times speaks to her goals to rock the strong roles:

“I have a responsibility to write strong female characters. I’m going to continue to do it.”

can’t wait to see it!

p.s. add a link to the film! :) because after reading this it reminded me i wanted to see if it was playing here yet or not.

Willo, you’ll also dig the great soundtrack, which plays in part on the comprehensive official site at Fox Searchlight, with showtime searches by zip. (Site by Real Pie Media — same as No Country for Old Men.)