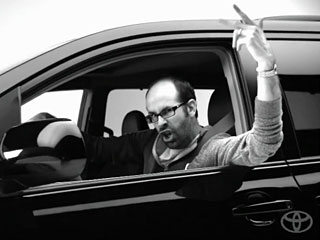 Toyota’s latest commercial campaign ups the ante to sell the minivan as an object of desire, not just necessity, by emulating a hip-hop video. It’s hard to imagine behavior like this getting anything but laughs in reality, but will this peddle minivans? I betcha it puts a demographic or two over the fence.

“Swagger’s” director, Jody Hill, is behind HBO’s “Eastbound & Down” and the film, “Observe and Report.” His story is pretty empowering: after starting as a PA in Los Angeles with dreams of directing, he left town where he had better opportunity to do his own work, starting with “The Foot Fist Way.” Success with the feature reached Will Ferrell and Seth Rogen, who brought Hill back, now above the line.

Banner at ToyotaSwaggerWagon.com [NO LONGER ONLINE]

With lyrics like “Where my kids at? / No, seriously honey, where are the kids? / They’re right there, see? / Oh, cool beans,” it’s nice to see the recall-ridden company having fun improving its image.

I love Jody Hill's work but I kinda expected more from him. This is competently done… Maybe I am just getting bored of rap spoofery.

I don’t know Jody Hill’s work, but I found the “Swagger Wagon” ad completely entertaining. Would that all ads were so well done, people wouldn’t complain about them so much. In fact, I’ve sought this ad out again and again on YouTube because I’ve liked it so much.