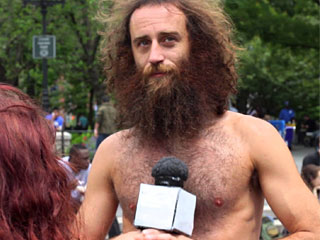 “You can’t get away from your heart. Because life is a paradox. Itâ€™s a mirror of confusion. So, love now.”

Framed by some sites and social media posts as a video featuring “inspiring advice from a mentally insane person,” something felt off. Student film? Branded content? Or somebody’s rush to judgment?

Sure enough, this is a performance artist named Matthew Silver and this is his schtick, in a video made by Enlisted Films uploaded last week. The filmmaker — who was unattributed by most social media shares due to how Facebook hosts unsearchable video (except Gizmodo) — notes that it’s a piece about “a man who runs around NYC in underwear saying and doing radical things. A friend and I stopped and actually listened, and he said some beautiful things.”

One commenter, Raj Marathe, notes that Silver “puts on unique performances and is good at being effective and acting. He is not a bum, a homeless person or anything like that– like some [point] him out to be. His day job involves editing wedding videos and being a filmmaker. He attended Ithaca College. His message is spreading awareness of loving yourself and others, to stop judging people, and other social awareness issues. You will hear him often refer to the ‘Love Movement’ in his discussions and presentations.”

Silver’s website features Gothamist’s video interview with him, which really explains his methodology in his own words:

In regard to the “viral” video, it’s a testament to the power of editing — and the rush to judgment that is easily made when presented out of context and without attribution.

Does this guy get it or what? RT @fwdlabs: He’s neither insane nor homeless, although social media judged otherwise http://t.co/2rpCZhXCBF