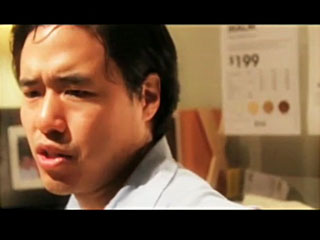 “IKEA Heights” is billed as a “furniture store melodrama” shot guerrilla-style at IKEA in Burbank. They just used a Rebel T1i, wireless lav mics and went about the store one afternoon.

The series was voted up on May 31, 2009 by audiences on Channel101.com, an experiment in online voting and offline screening. “For the creatives that participate, … the deadlines are unreasonable, the time limit is impossible, the pay is non existent and the judgment is blunt. The amount of ego and sense of entitlement with which you enter is exactly proportional to the amount of pain you’ll experience before you leave. Channel 101 is where you learn three things: [h]ow to fail, how to succeed, and finally, how there is no difference between the two.” Like FWD:labs, they have monthly events in Los Angeles.

Episode two of “Ikea Heights” will be screening June 28 at Cinespace in Hollywood and uploading soon thereafter.

(Thanks to Scott Gruber for the tip.)

we should go the the june 28th showing huh?