How the Networks Can Make More Hit TV 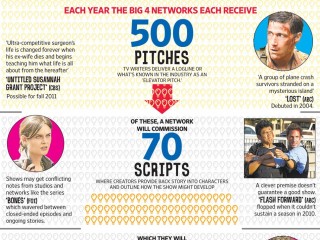 Infographic by The Wall Street Journal.

According to The Wall Street Journal, between CBS, ABC, NBC and Fox, each season brings each major network approximately 500 pitches, followed by requests for 70 scripts, shoots for 20 pilots, and airings for 4 to 8. Only one or two make it to multiple seasons.

This shortage of content has multiple culprits: too many decision makers, not enough time to flourish, and too few networks. Historically speaking, some of the most popular shows on television didn’t have to beat these odds.

“Some shows end up coming out of the development process like a camel, a horse designed by committee,” says Jeff Melvoin, a veteran producer who worked on “Alias,” “Northern Exposure,” and “Hill Street Blues.” Mr. Melvoin now works on cable, which has smaller audiences and fewer demands, as an executive producer on “Army Wives.”

Networks analyze how ratings drop off during commercial breaks, a sign that viewers have sampled, and rejected, a series. Last month CBS pulled its spy comedy “Chaos” after three episodes. The debut episode opened with seven million viewers. After 15 minutes, 6.3 million were watching, according to Nielsen Co.

CBS, the top-ranked network in total prime-time viewers, limits the executives who offer input on new series. In addition to Chief Executive Leslie Moonves, “it’s me, it’s the head of the department, it’s the show runner. We don’t have committees,” [CBS Entertainment President Nina] Tassler says.

So, what’s wrong with the networks in finding more hits? Here are my off-the-cuff observations.