“Care Center Slaughterhouse” is a trailer directed by Benjamin Lee Martin for the “Hobo with a Shotgun” online grindhouse trailer competition. The winner’s trailer is added to the DVD release of “Hobo with a Shotgun,” with a chance at development into a feature. In a race to the top of the vote, “Care Center” is currently in second place. 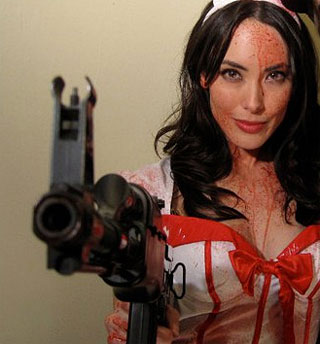 Benjamin Lee Martin It was a deadline and I love the genre and wanted to be a part of it! I have a lot of back-burner projects and dream scripts I want to do, but there was no time limit, so they could be put off. It’s so easy to make excuses for not getting something done, and that’s were I was at. So this contest was the kick in the ass I needed!

Did the larger idea precede or just inspired with this story?

BLM I got the idea for Care Center Slaughterhouse [CCS] as a feature not a week before I found out about the contest, so it was just perfect timing. The idea came out of a few drawings I did of old people beating the crap out of each other! As far as I’m concerned, this contest isn’t the end for CCS!

All planned or any happy accidents?

BLM I work with actors on a daily basis and I know that they are artists who want to bring their own to the table–so I let them do what they want first, then fine tune it from there. Subtle, but fantastic things, happen. Like the guy playing cards while the woman sews a severed nurse head! That was all the actor’s idea. You gotta let things happen cause it’s usually stuff you’d never think of. That’s filmmaking!

Favorite collaboration on this project, such as specific cast or crew?

Favorite part of the production, from pre through post?

BLM It happened so fast it’s all a blur. I did all the casting and scheduling of the actors, which was a pain–why did I decide to make a 2 min trailer with 15 actors!? Production and shooting is the most fun–I love the chaos of it. Editing is more relaxing for me cause I get to sit back and play around with the footage.

What’s next? How can readers help?

BLM Readers can help by voting for Care Center Slaughterhouse! Online voting is open until April 7th at 11:59 PM EST.

At first, we didn’t make the top 5, then they removed a disqualified entry and put CCS in–so we missed the first 5 hours of crucial voting time. But I’ve already won cause it got done and really made me realize what I’m supposed to be doing with my life!

And next? Care Center Slaughterhouse, the feature! Mwuahahahaaa!

Overall, how was the experience and what did you learn?

BLM It was huge learning experience for me. The most important thing I learned is that no matter what happens, if you’re determined and willing to roll with the punches, it all works out.

Also, get off your asses and make stuff, and I’ll promise to do the same!

Benjamin, any thoughts on the aftermath? Any renewed impulse to do this all again, with or without a contest?

Renewed faith in the movie Gods is what I got!

Right now I’m working on the CCSlaughterhouse feature script–which is turning out a lot darker and creepier than the trailer. I’m also working on a horror anthology project that will most likely turn into a webseries of 5 min horror shorts all tied together by a very spooky host.

And hopefully the exposure of CCSlaughterhouse will get the attention of fellow filmmakers who want to work on projects. Hit me up!