How to make a story-rich music video 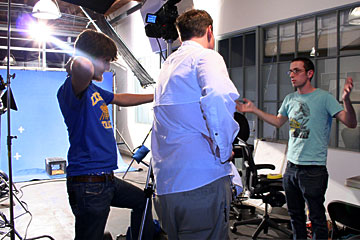 Hank Friedmann is a director with an attention to detail and a craving for story. I remember a fellow director, Jaraad Virani, introduced us about 5 years ago when I was looking for a production designer. I hired Hank on the spot. His professionalism, punctuality and panache were untouchable at 18. Nearly every day leading to production on “The Plagiarist,” the most meticulous e-mails would chime in non-stop. “Here’s what I’ve collected from home: … Alcohol items (awesome leather decanter, steel ice bucket, goblet), Leather and Snakeskin satchel, Aztec head (amulet), Rabbit TAIL with Native American design …”

Needless to say, Hank has gone above and beyond ever since with great acclaim: his self-produced animated shorts, “Native with a Camera” and “The Creature from Beyond Time”; his founding and curating of the Transdimensional Short Film Festival; his collaborative roles in sketch comedy television show, “Fireside Chats”; and his latest creation, “Care for Some Whiskey,” the debut music video for rock musician Leerone.

Aaron Proctor: How did you get the gig? And how did Leerone become your number one fan?

Hank Friedmann: She’s close family friend and knew I did video work. One day our families went to the Katella Deli after temple and she brought up the idea of doing a music video for one of her songs. I stalled until I graduated from UCLA, and then we started putting this monster project together.

My bosses at Final Cut (the editorial company, not the Apple program) let me stay late at night and on weekends editing and compositing the vid, and all I had to do is show up at work the next day and pretend I wasn’t exhausted, and they’d be happy.

What inspired you to make this video?

I wanted to make my own Grimm fairy tale set to song, and also needed reason to learn more stop-motion animation and compositing techniques. For the most part, the story and style you see is what I imagined when I first heard “Care For Some Whiskey,” though Leerone and I did work out the details. 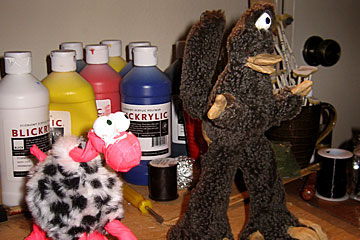 Two of Hank’s puppets starring in “Care For Some Whiskey”

The video took you over a year to do. Can you talk about the process? What kept you motivated?

It took so long because I made all the sets and puppets and learned to composite with Shake. I had a desk with paints, fur, armature wire, plaster, liquid latex, etc. Each cage took a day to make, each puppet had about two aborted prototypes, and I kept experimenting with materials that ended up blowing. I took over the dining table for 4 months, and each shot took anywhere from a half hour to a full day. (Watch for the full-body shot of the troll walking towards the camera.) Some complicated shots took more than a day to composite as well, but mostly because I was new to that type of work. The live action shoot only took two days, however, because of a small but helpful crew, and Leerone’s didn’t make us run out to get floor pads for her repeated falls.

My motivation came from Leerone, who didn’t deserve the long wait for her video, and from my roommates, who were sick of eating off the coffee table and wanted the dining room back. If I did a video like this today it would probably take 1/4th the time, because I’d cut most of the self-education out of the equation, and I’d get a lot more help. 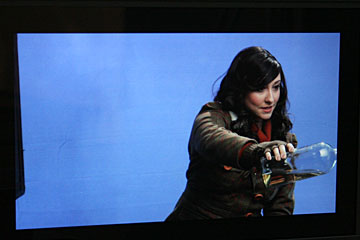 Rock musician Leerone, who blogged and photographed the video production

You’ve got quite a lot of experience with creative filmmaking, especially coming off of Fireside Chats. How did your past experience influence the video?

My buddies and I spent a year working on Fireside Chats, writing, shooting, and editing sketches despite our busy school schedules. The show helped me tell a concise story, sell punch lines, and gave me a body of work to build off of. One of the reasons Leerone liked my work was the stop-motion intro to Fireside Chats, which I wrote, animated, and edited. That video took me only two days to do, but that’s because I used pre-made gnome puppets and used a woodsy trail and an old fireplace as backgrounds.

Do you follow the comments on the social video networks and the bulletin boards about the video?

I sure do — I have to write all the comments.

The video is on Vimeo, YouTube, Yahoo! Video, MetaTube, AOL Video, MySpace TV and IMEEM. It also got picked up on the music video blog Antville and as a Yahoo! Video Editors’ Pick. Other than online, do you know where the video is playing?

Online’s the place to be — though Leerone and I are pushing for film fests and other media.

I personally witnessed Hank’s tireless devotion to this video: never a compromised creative idea – always passionately dedicated to the perfection of the work. If it were possible to buy stock in “Hank Friedmann,” I’d be the major shareholder.

Great interview. I commend the interviewee and interviewer!! I remain Hank’s #1 fan. Unless, that is, someone wants to go head to head?!

Leerone, thank you so much for dropping by and your kind comments!